Alexandra Eurdolian and Smita Sharma for unrwa.org
The iconic image of a huge crowd waiting for UNRWA food parcels in the Palestinian refugee camp of Yarmouk, Damascus has gone up simultaneously on the "Jumbotron" billboard in New York's Times Squareand in Tokyo’s Shubyia district on the same day
21 March 2014

The United Nations has drawn on the bustling energy of two of the world’s most fabled crossroads – New York City’s Times Square and Tokyo’s Shibuya crossing – to spotlight the ongoing struggle of besieged civilians trapped amid Syria’s civil war, launching a “flashmob” and simultaneously showing on the junctions’ mega-billboards the now-iconic photograph of thousands of people in a Damascus refugee camp waiting in line for food supplies.

The massive international social media campaign led by the UN Relief and Works Agency (UNRWA), which ensures the well-being of Palestinian refugees across the Middle East, culminated with last night’s simultaneous events on either side of the globe: in New York scores of people joined a flashmob vigil silently holding up pita bread to the gaunt figures on the giant screen above; in Tokyo, similarly enthusiastic crowds gathered.

The image being viewed by the crowds is jaw-dropping: it shows thousands of Palestinian refugees waiting amid the rubble of crumbling buildings to receive food aid in Yarmouk, which is a suburb on the outskirts of Damascus, and to which UNRWA and its humanitarian partners had had only sporadic access during the Syrian conflict. 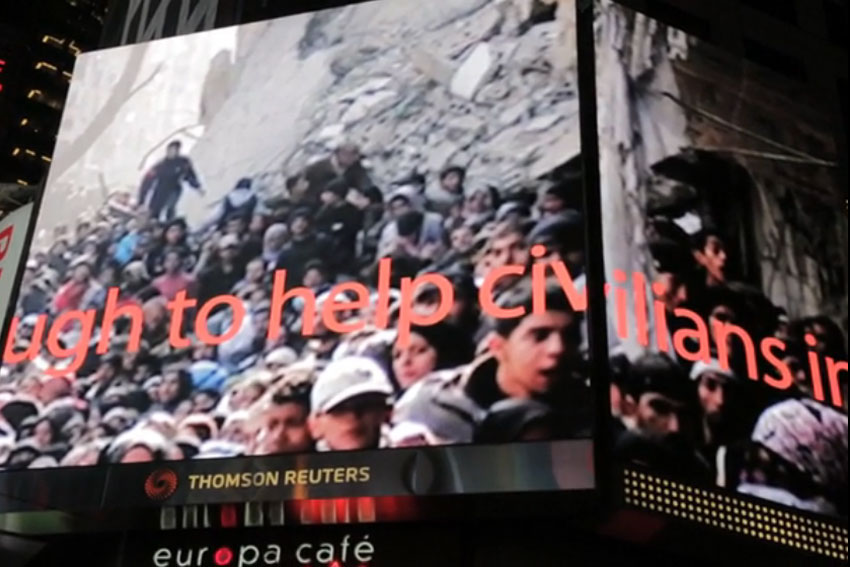 A silent Flash Mob Vigil in Times Square New York in support of Palestinians in Damascus and civilians across Syria. Photo: Smita Sharma for unrwa.org

After UNRWA released the photo in February, the image went “viral” and was shared millions of times via social media. UNRWA Spokesperson Christopher Gunness has said the image is “cinematic in scope,” starkly revealing “vignettes of inhumanity” that have become the daily lives of those suffering in Yarmouk and, ultimately, throughout Syria.

“When an image embodies the collective conscience of its time in a manner that is at once universally epic and deeply personal, it takes on a transformative power of its own.”

Mr. Gunness said that the international social media campaign built around the photo, which kicked off earlier this week with a Thunderclap – reached almost double its target of 23 million, the pre-war population of Syria.

The broader #LetUsThrough initiative generated over 38.5 million social media impressions and reached over 26 million people, demanding humanitarian access to what the UN estimates are 10 million people in Syria who need assistance, including 5 million children. 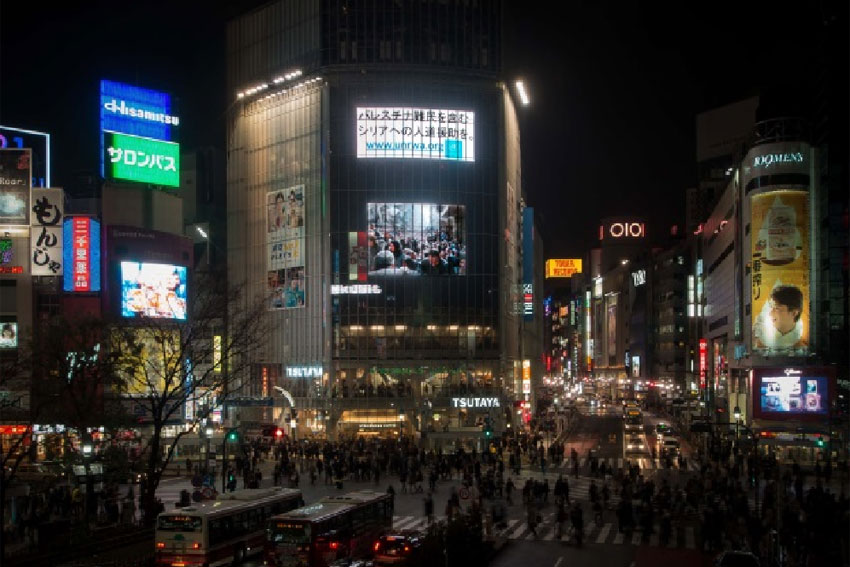 The showing in Times Square was twinned and the campaign image and message been projected in Tokyo’s Shubyia district on the same day. Photo: unrwa.org

“This is the expression of a groundswell of revulsion felt around the world for the profound suffering this pitiless conflict is inflicting on millions of besieged, innocent civilians in Syria; women, children, the elderly, the sick, the dying,” said Mr. Gunness.

“It was a moving act of symbolism that the image went up at the two corners of the earth and close to the UN in New York, sending a powerful message from the ordinary people of the world to the diplomatic community that we have had enough of the immense suffering resulting from a conflict that is moving into its fourth tragic year,” he added.

The screenings came as UNRWA announced it has gained access to Yarmouk camp, and had delivered, since 18 January, 8,728 food parcels. “This is not enough,” said Mr. Gunness, recalling that the UN Security Council unanimously adopted a resolution in late February demanding the parties grant immediate humanitarian access and has threatened further action if there is non-compliance. 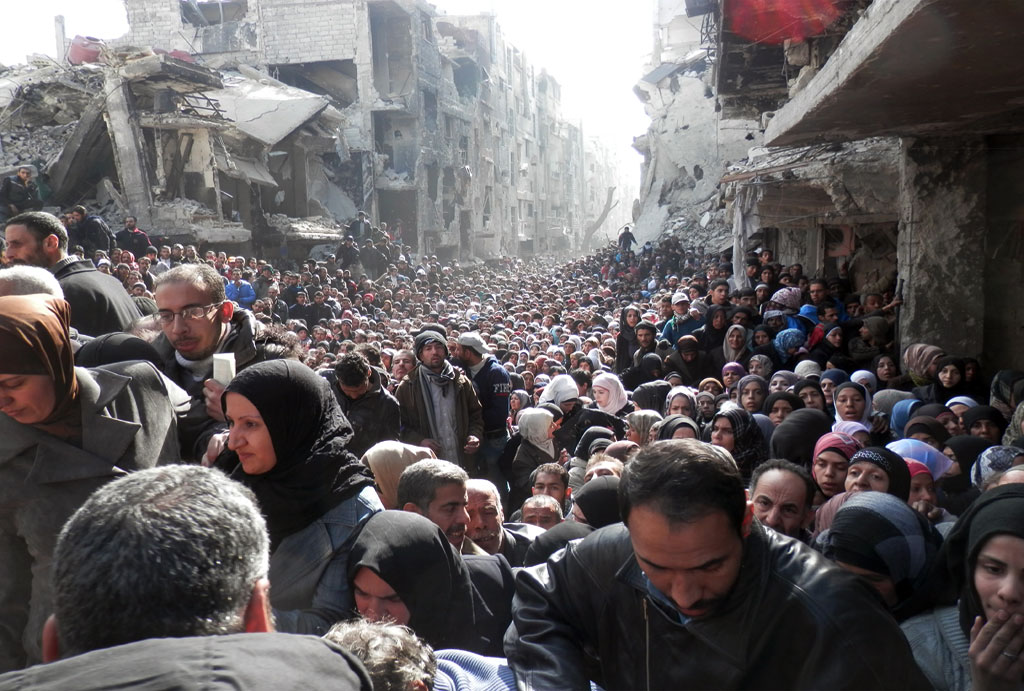 “We hope that a combination of the iconic power of this image, the expressed concern of global citizenry and the unanimous voice of the Security Council will make a real difference and bring an end to all this needless suffering,” he said.

A United Nations convoy carrying vital humanitarian supplies for hundreds of thousands of people in desperate need in northern Syria is leaving today from Turkey, the first time in the three years of the conflict that aid is being transported via this route.