20 March 2014
Over the past 20 years, the United Nations Framework Convention on Climate Change has galvanized the world to seek multilateral solutions to the grave threat of climate change, Secretary-General Ban Ki-moon said today, urging stakeholders to use the occasion of its twentieth anniversary to “rediscover the commitment that brought the Convention to life.”

Over the past 20 years, the United Nations Framework Convention on Climate Change has galvanized the world to seek multilateral solutions to the grave threat of climate change, Secretary-General Ban Ki-moon said today, urging stakeholders to use the occasion of its twentieth anniversary to “rediscover the commitment that brought the Convention to life.”

Hailing the twentieth anniversary of the Convention (UNFCCC) and commending all those who made it possible, Mr. Ban emphasized that the accord’s landmark Kyoto Protocol established the world’s first greenhouse gas reduction treaty, with binding commitments for industrialized countries, and set the stage for the establishment of the world’s carbon markets.

Further, the clean development mechanism and joint implementation initiatives have enabled emissions trading and carbon offsets in the developing and developed worlds. The expanded UN Reducing Emissions from Deforestation and Forest Degradation in Developing Countries (REDD+) programme is helping to place value on carbon stored in forests and reduce emissions from deforestation and land degradation.

The Secretary-General also noted that finance, technology transfer and capacity-building have unlocked access by developing countries to public and private resources. “In aggregate, the UNFCCC has been a major catalyst in the growing developmental shift to clean technology, renewable energy, improved efficiency and adaptation,” he declared.

“At the same time, considerably greater ambition is needed to match the scale of the global challenge posed by climate change,” said the UN chief, explaining that greenhouse gases are at their highest atmospheric concentration in 800,000 years. People everywhere – especially the poorest and most vulnerable – are experiencing the growing effects of unpredictable and increasingly extreme weather patterns.

Two decades of work by the UNFCCC and its parties have created the infrastructure to spur a resilient, low-carbon global economy. “Our challenge now is to use this machinery – not only to tackle climate change, but to deliver sustainable energy for all, make the air in our cities fit to breathe, generate decent jobs and help eradicate extreme poverty,” he said.

Continuing, Mr. Ban said that Governments have agreed to reach a new universal climate agreement by 2015. To support them, he will convene a climate summit on 23 September to mobilize political will and showcase action that can help to raise ambition levels worldwide. He has invited world leaders, along with senior representatives from civil society and the private sector, to work together for transformative results.

“We know what we need to do and how to do it. As we mark this anniversary, let us rediscover the commitment that brought the Convention to life,” the UN chief said, urging stakeholders to work together for a meaningful climate agreement that will set the world on a sustainable path for generations to come.

Making a similar call to action is Christiana Figueres, UNFCCC Executive Secretary, who in her statement said the anniversary is a moment to celebrate the far-sightedness of the Convention and all of the investment in its implementation that so many thousands of people have made over the last two decades.

“But it is also a time when we can reflect on the distance we all have yet to travel to achieve the ultimate objective enshrined in the Convention, which is to prevent dangerous human interference with the climate system and ensure sustainable development for everyone,” she said, adding that she hopes this anniversary inspires everyone to recommit to the Convention, to its implementation and to a meaningful 2015 agreement.

Meanwhile, a new report released today by the International Resource Panel and the UN REDD+ Programme states that an investment of $30 billion per year – under 7 per cent of the $480 billion paid in annual global fossil fuel subsidies – in the REDD+ forest conservation initiative can accelerate the global transition to green and sustainable growth and ensure the long-term well-being of tens of millions in developing countries.

The report Building Natural Capital: How REDD+ Can Support a Green Economy, lays out recommendations to deliver the new integrated REDD+ and Green Economy approach, including better coordination, stronger private sector engagement, changes in fiscal incentive frameworks, greater focus on assisting policy-makers to understand the role forests play in propping up economies, and equitable benefit sharing. The report stresses, in particular, the need for a rights-based approach to ensure that benefits flow to the rural poor.

Commenting on the aims of the report, Achim Steiner, Executive Director of the UN Environment Programme (UNEP), said REDD+ is a bold project that offers an opportunity for countries to pursue a more sustainable development pathway through the conservation, restoration and sustainable management of forests.

“We need to create the enabling conditions required for REDD+ to succeed from good governance and sustainable financial policies to equitable distribution of benefits. These enabling conditions are themselves the building blocks for an inclusive Green Economy," he added. 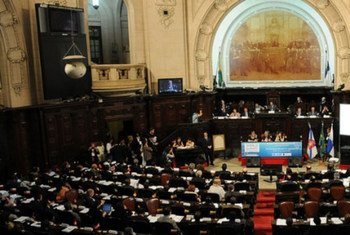