Over half of Syria’s chemical weapons removed or destroyed, says joint OPCW-UN mission

The Joint Mission of the Organization for the Prohibition of Chemical Weapons (OPCW) and the United Nations said today that over half of Syria’s chemical weapons material has been removed or destroyed.

“The Joint Mission welcomes the momentum attained, and encourages the Syrian Arab Republic to sustain the current pace.”

A total of 11 consignments of chemicals have now been transported out of Syria for destruction, according to a news release issued by the OPCW. When all of the Syrian chemicals from all storage sites have been loaded aboard Danish and Norwegian cargo ships, they will be transported to various locations for destruction under the verification of OPCW inspectors.

OPCW added that as the removal process continues, a team of experts is currently in Syria to facilitate the formulation of a plan to destroy certain structures that housed Syria’s chemical weapons production facilities.

The removal of the most critical material for destruction began in early January, in line with an agreement brokered by Russia and the United States under which Syria renounced its chemical weapons material and joined 1992 Convention on the Prohibition of the Development, Production, Stockpiling and Use of Chemical Weapons. 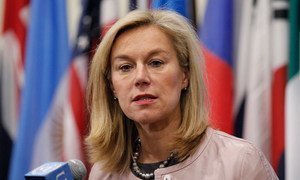 A recent acceleration of efforts by Syria and the submission of a revised timeline for removing toxic agents bode well for meeting the 30 June 2014 deadline for destroying the country’s chemical weapons programme, the official charged with overseeing the venture said today after briefing the United Nations Security Council on progress to date.