A Syrian refugee family in southern Turkey, where more than 20,000 people have fled to so far in early 2014 to escape fighting. UNHCR Photo

20 March 2014
A United Nations convoy carrying vital humanitarian supplies for hundreds of thousands of people in desperate need in northern Syria is leaving today from Turkey, the first time in the three years of the conflict that aid is being transported via this route.

The convoy is leaving the Turkish border crossing at Nusaybin and is bound for the city of Qamishli, according to Regional Humanitarian Coordinator Nigel Fisher.

It marks the first time since the conflict started in March 2011 that the UN has been able to carry aid across into Syria from Turkey, noted Mr. Fisher, who expressed appreciation for the approvals given by both countries which enabled the crossing.

“The opportunity to start the dispatch of a convoy of 79 trucks through the Nusaybin/Qamishli border is a sign of progress. We are encouraged by this development, which, although a small step, gives us hope that additional border crossing points will be opened up, to enable us to provide much more humanitarian assistance to the countless Syrians who are in desperate need of support for their very survival.”

The convoy is carrying food supplies, blankets and mattresses, family kits, hygiene kits, medicines and medical supplies from the World Food Programme (WFP), the Office of the UN High Commissioner for Refugees (UNHCR), the UN Children’s Fund (UNICEF), the World Health Organization (WHO), and the International Organization for Migration.

This latest development comes nearly one month after the adoption of a resolution by the UN Security Council demanding that all parties, particularly the Syrian authorities, promptly allow “rapid, safe and unhindered humanitarian access” for UN agencies and their partners, including across conflict lines and across borders.

Well over 100,000 people have been killed in the conflict, which recently entered its fourth year, while an estimated 9 million others have been driven from their homes. In addition, there are currently more than 2.4 million refugees from Syria registered in neighbouring countries.

Among other consequences, the ongoing conflict has resulted in a breakdown of health services, shortage of qualified personnel and the disruption of reproductive health supplies. The UN Population Fund (UNFPA) is calling for urgent support to protect the lives of an estimated 200,000 pregnant women in the country who are facing malnutrition, lack of medical care and unsafe deliveries.

“Many pregnant women in Syria suffer multiple challenges, such as psychological difficulties, gynaecological problems, nutritional shortages and complications from early pregnancies,” said Daniel Baker, UNFPA Syria Regional and Response Advisor. “Maternal deaths tend to increase during disasters. Yet these can be prevented if urgent interventions are made at the right time.”

As the conflict displaces thousands of women and threatens their security, pregnant women are increasingly opting for Caesarean sections to ensure access to a doctor at the time of delivery, UNFPA noted.

The agency said it is “alarmed” by the increase in the rate of Caesarean sections within Syria, from 19 per cent in 2011 to 45 per cent in certain areas in 2013. Global guidelines recommend that no more than 15 per cent of deliveries should be performed this way. This adds to the costs and strains on an already overburdened health system and puts women at further risk.

Meanwhile, the experts comprising the UN Working Group on Enforced or Involuntary Disappearances today highlighted the issue of disappearances, noting that it has received an increasing number of cases since the start of the Syria conflict.

“Enforced disappearances are being perpetrated as a systematic and widespread attack on civilians, thus qualifying as a crime against humanity,” the Working Group observed in a news release. “The situation of enforced disappearances in Syria is alarming and deserves immediate United Nations attention.”

The five-member Group also voiced deep concern that opposition forces have resorted to similar practices against civilians perceived to be supporting the Government, human rights defenders, journalists and religious leaders.

The Group has requested the Security Council to consider referring the matter to the International Criminal Court, and called on the Human Rights Council, the General Assembly, UN Secretary-General Ban Ki-moon and the Joint Special Representative for Syria, Lakhdar Brahimi, to take action.

“We also call on Syria to take decisive action to eradicate enforced disappearances, ensure its prevention and bring perpetrators to account,” the experts stated.

Over half of Syria’s chemical weapons removed or destroyed, says joint OPCW-UN mission 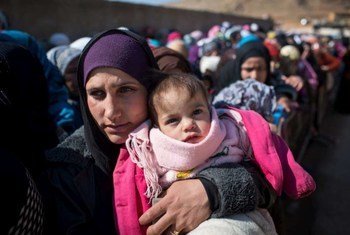 15 March 2014
With nearly 13 million Syrians uprooted from their homes, senior United Nations officials warn that without a political solution to the conflict, which today enters its fourth year, Syria and its people face years more of destruction and continued brutality.