19 March 2014
With Secretary-General Ban Ki-moon headed to Russia and Ukraine as part of his diplomatic efforts to de-escalate current tensions, the Security Council heard senior United Nations officials in New York urge adherence to fundamental principles of the UN Charter, including respect for Ukraine’s sovereignty and territorial integrity, and ensuring respect for the human rights of all.

With Secretary-General Ban Ki-moon headed to Russia and Ukraine as part of his diplomatic efforts to de-escalate current tensions, the Security Council heard senior United Nations officials in New York urge adherence to fundamental principles of the UN Charter, including respect for Ukraine’s sovereignty and territorial integrity, and ensuring respect for the human rights of all.

“It is in the spirit of the UN Charter that [the Secretary-General] now embarks on his mission to Moscow and Kiev,” said Deputy Secretary-General, Jan Eliasson, who, alongside UN Assistant Secretary-General for Human Rights, Ivan Simonovic, briefed the Council on the latest events in the crisis-torn region.

Mr. Ban’s first stop will be the Russian capital, where he will meet on Thursday with President Vladimir Putin, Foreign Minister Sergey Lavrov and other senior officials, according to the Secretary-General’s spokesperson.

On Friday, the UN chief will travel to Kiev, where he will hold talks with Acting President Oleksandr Turchynov, Prime Minister Arseniy Yatsenyuk and other officials. While in the Ukrainian capital, he will also meet with members of the UN Human Rights Monitoring Mission and representatives of civil society.

Mr. Eliasson said that since his own mission to Ukraine at the beginning of the month, “the crisis has continued to deepen [and] tensions in Crimea and in eastern Ukraine continue to rise…we are now faced with risks of a dangerous further escalation that could have ramifications for international peace and security and have serious significance for this Council and for the United Nations.”

Laying out a succinct timeline of the “fast-moving and serious” events, he told the Council: Crimean authorities had announced that close to 97 per cent of those who voted in Sunday’s referendum did so in favour of secession from Ukraine; subsequently, Crimea declared its independence, which in turn was recognized by Russia; Monday the European Union and the United States moved to apply targeted sanctions against Russian and Crimean officials.

Further: President Putin has signed a treaty to make Crimea part of the Russian Federation; the Government in Kiev meanwhile has committed to never accept Crimea’s independence or annexation, stating that Crimea is an integral part of Ukraine; and yesterday, Ukraine's Prime Minister expressed concern that the conflict in the Crimean peninsula is ‘shifting from a political to a military stage.’

“This followed reports that a Ukrainian officer was killed in front of a Ukrainian military base on the outskirts of Simferopol,” Mr. Eliasson continued, noting that after this incident, the Ukrainian Deputy Prime Minister and Defence Minister planned to travel to Crimea today. In turn, the Crimean leadership has allegedly stated that Ukraine's officials would be turned back.

“This underscores the dire need for the immediate opening of direct dialogue between Moscow and Kiev.”

He said that reports are emerging today that two Ukrainian naval bases in Crimea have been taken over by pro-Russian forces or unidentified groups. While initial reports suggest that the seizures of bases have so far occurred without bloodshed, such developments obviously carry grave risks. “The Secretary-General has constantly underlined the importance of avoiding further provocative actions and of refraining from incitement,” said Mr. Eliasson.

“These latest events have heightened tensions and added new layers of complexity to an already precarious situation.’

Mr. Eliasson noted that in a wider perspective, all should recall that Russia and Ukraine remain neighbours, with close, often complex, historic, cultural, economic and political ties. “It is our view that it is in the interest of all of us that these two nations have positive ties, with each other and with the broader region. But the first step in that direction has to be based on immediate de-escalation and restraint in the present crisis.”

Echoing some of the Secretary-General’s key recent messages, Mr. Eliasson said: “It is clear that we are at a crossroads. If positions continue to harden and rhetoric continues to sharpen, there is great risk of a dangerous downward spiral. …The focus must be to engage in direct dialogue between Moscow and Kiev aimed at agreeing on specific measures that will pave the way towards a diplomatic solution.”

“I only wish to add that our primary diplomatic tool is constructive dialogue on the basis of the chapter in the Charter on pacific settlement of disputes,” said the UN Deputy chief, adding that the Organization will continue to play its role of promoting dialogue for a peaceful and joint resolution of this crisis, “which now has become more serious than ever.”

Months of political unrest in Ukraine led to the removal by Parliament of President Viktor Yanukovych in February, followed by increased tensions in the country’s autonomous region of Crimea, where additional Russian military were recently deployed and a secession referendum was held on Sunday. 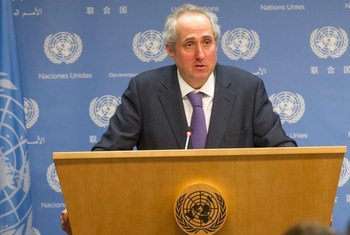 17 March 2014
Leading the United Nations push for parties in Ukraine to resolve the country’s ongoing political crisis through peaceful dialogue, Secretary-General Ban Ki-moon today said he is “deeply concerned and disappointed” that this weekend’s Crimea secession referendum will only exacerbate an “already complex and tense situation.”