18 March 2014
Against the backdrop of last week’s ‘dangerous escalation’ in Gaza and Israel, the top United Nations political official told the Security Council today that this latest upsurge serves as yet another reminder that the international community must work together to resolve the Arab-Israeli conflict and restore prospects for a durable peace throughout the Middle East.

“Last week, with the situation in Gaza, we came very close to the brink of another crisis in an already volatile region,” Under-Secretary-General for Political Affairs Jeffrey Feltman said, referring to the most recent actions by both sides undermining the fragile ceasefire in the Gaza Strip, including dozens of rockets being fired at Israel, border incidents, and Israeli retaliatory operations causing death or injury to civilians.

“The status quo is not sustainable,” he said, emphasizing that the Middle East still faces an unpredictable future with multiple sources of uncertainty. But what is certain, is that the Arab-Israeli conflict cannot be ignored in shaping this future constructively.

“The Secretary-General remains convinced that a solution of the Palestinian-Israeli issue, in the form of a negotiated two-state solution, is the best contribution we can make at this time to regional stability.”

Mr. Feltman said that eight months since the resumption of talks between Israelis and Palestinians, United States-led efforts to present a basis for continued negotiations are ongoing. “We are yet again approaching some decisive timelines. Leaders on both sides are confronted with difficult decisions,” he said, emphasizing that public support for peace among Israelis and among Palestinians, both in the West Bank and Gaza, will be tested.

‘Worrying trends’ also continued in the West Bank, with Israeli Security Forces carrying out 292 search and arrest operations. Further, a total of 325 Palestinians were arrested, including an alleged al-Qassam Brigades leader in Hebron on 4 March, and 128 Palestinians were injured. An Israeli soldier was also injured.

He said that clashes also continued in and around refugee camps, in particular in Al Jalazun camp near Ramallah, as well as during demonstrations against the barrier. “Settler attacks resulted in eight Palestinians injured, including two children.

On 2 March, a settler vehicle reportedly fatally struck a 66-year-old Palestinian near Ramallah, he continued, adding that, settler violence also resulted in damage to Palestinian property, leaving some 390 trees and saplings were reportedly vandalized, including some 180 olive trees uprooted near Qalqiliya on 2 March. Also, on 26 February, Palestinian stone and Molotov cocktail throwing attacks resulted in injuries to three settlers near Nablus, and material damage to vehicles, including to the vehicle of an Israeli Knesset member near Nablus on 9 March.

Along with the deadly up tic in violence in Gaza, Mr. Feltman drew the Council’s attention to the steadily worsening economic and humanitarian situation there, in the context of a tightened access regime and violence both severely affecting the lives of the population in Gaza. The area’s unemployment rate is 38.5 per cent and the ‘extremely limited’ movement in and out of Gaza from Erez and Rafah crossings continues to afflict the civilian population, including medical patients.

“We fully recognize the complex security dimension of the situation in Gaza, however the price should not be paid by the people,” he said, explaining, in the context of deteriorating humanitarian and development conditions, the UN finds it increasingly difficult to provide assistance to the population of Gaza while restrictions on access, including for UN operations, persist and have even increased.

“We would like to call the attention of the Council to this unsustainable situation in the Strip and appeal to all parties concerned to contribute to alleviating the deteriorating conditions of the civilian population.”

Turning next to the Golan Heights, he said the situation there remains “volatile” with heavy clashes between the Syrian armed forces and members of the armed opposition. Shelling continued primarily in the southern part of the area of separation and the area of limitation adjacent to it.

In Lebanon, the Government formed on 15 February submitted its Ministerial policy statement to Parliament and is awaiting a vote of confidence due on 20 March. “Mr. Feltman said he was very pleased by the Government’s focus on matters. Among other, respect for United Nations resolutions – including resolution 1701 (2006), support for decisions taken under Lebanon’s National Dialogue, and recognition of the importance of securing Lebanon’s borders, improving security and preparing for the Presidential election process which is due to start on 25 March and take place by 25 May.

“It remains important that all parties in Lebanon continue to work together in the same spirit under which the new Government was formed in order to tackle the very significant security and humanitarian challenges the country faces,” he added. 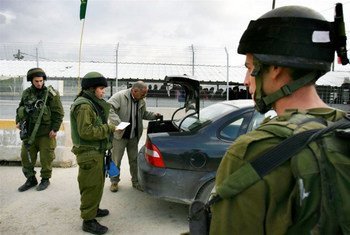 11 March 2014
A senior United Nations official in Jerusalem today voiced his deep concern at reports that three Palestinians died in separate security-related incidents in the West Bank within a 24-hour period, and called for restraint by all concerned.