UNHCR/O. Laban-Mattei
A Syrian mother and her children arrive at the dilapidated basement building where they are staying in Amman, the capital of Jordan.
18 March 2014

Hundreds of thousands of Syrians forced to flee the bloodshed in their homeland and now living in Jordan, are struggling to make lives for themselves outside that country’s protective umbrella of refugee camps, a study co-led by the United Nations refugees agency found.

“The survey shows the day-to-day survival struggle of some 450,000 registered Syrian refugees as they face rising rents, inadequate housing and educational challenges for their children,” despite the support Jordan offers to them, including free access to the public health care and school systems, said Dan McNorton, spokesperson for the Office of the Office of the UN High Commissioner for Refugees (UNHCR).

Among the 584,600 Syrians currently living in Jordan, it is estimated that almost four-in-five of them live outside formal camps and “as their resources dry, many are turning to ‘negative coping mechanisms’ to make ends meet, sometimes placing themselves at risk of exploitation,” stressed Mr. McNorton during a press briefing in Geneva.

“After escaping the horrors of war at home, hundreds of thousands of Syrians who have fled the violence and deprivation are facing a second crisis in their place of refuge,” said Andrew Harper, UNHCR's representative in Jordan. “Syrian refugees in Jordan are hanging on by a thread: struggling to keep a roof over their heads and earn enough money to get by.”

The report comes amid indications that as the last of their assets are drying up, many families are turning to “negative coping mechanisms” to make ends meet, sometimes placing themselves at risk of exploitation.

A joint initiative between UNHCR and International Relief and Development (IRD), the study shows the hardships of some these displaced Syrians, through 92,000 interviews with families, conducted during home visits between June 2012 and October 2013.

A new refugee enters Jordan every minute. Help is needed. Support from the UN Development Programme (UNDP) in these communities absorbs the human shock of a conflict with no end in sight. Credit: UNDP

It reveals that more than 90 per cent of the population surveyed lives in rented accommodations, at which prices rose in 2012 and 2013 by as much as 25 per cent in some locations. While rent payments account for almost two thirds of refugee expenditure, half of Syria’s refugees feel they live in inadequate dwellings, including badly ventilated apartments that suffer from damp or mould.

Mr. McNorton deplored that “61 per cent of Syrian children covered did not go to school during the 2012-2013 academic year,” and that “among those at school, five percent reported having dropped out.” UNHCR with its partners continue to look into the reasons, but these include challenges adjusting to the Jordanian curriculum, inability to catch up, having to work to earn money for their families, and the over-stretched capacity of the Jordanian public education system.

UNHCR and IRD continue to interview some 10,000 refugee households every month in an effort to maintain an understanding of new or worsening vulnerabilities among displaced families living outside of camps.

♦ Receive daily updates directly in your inbox - Subscribe here to a topic.
♦ Download the UN News app for your iOS or Android devices.
jordan

Senior UN official in Jordan to address plight of refugees there 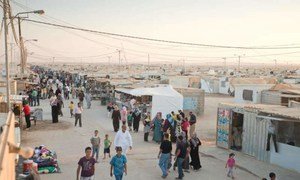