WIPO/Emmanuel Berrod
Nono-Y the robot was one of the highlights of the 2012 Geneva Inventions Fair.
13 March 2014

The US accounted for 56 per cent of patent filings, with Chinese applicants filing 29 per cent of the 205,300 applications for intellectual property under the Patent Cooperation Treaty (PCT) System. Under this system, applicants can simultaneously seek protection for an invention in 148 countries throughout the world by filing one international application.

According to WIPO, the overall 2013 figure represents a 5.1 per cent growth in applications compared with 194,400 the previous year, when figures still trailed growth seen prior to the global financial crisis in 2007.

The Madrid System, which registers trademarks, saw a 6.4 per cent rise in applications to 46,829 in 2013, the highest number ever recorded.

Germany filed 6,822 applications, followed by the US with 6,043 and France with 4,239 in 2013. The Swiss pharmaceutical company, Novartis, heads the list of top applicants, with 228 applications.

International industrial design applications filed under the Hague System increased to 2,990 filings in 2013, also another record, representing growth of 14.8 per cent.

In line with growing investments in research and development, the automobile industry has seen a sharp increase in international patent filings over the last three years, WIPO reported. 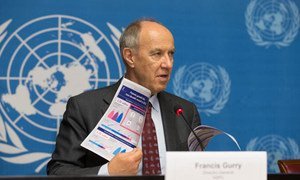 Intellectual property patent filings worldwide grew at their fastest pace in almost two decades in 2012, driven by China, according to the United Nations agency charged with protecting inventions, trademarks, industrial designs and copyright.