In an increasingly interconnected world, children are more at risk that ever of being sexually exploited or sold, a United Nations independent expert warned today, calling for decisive steps at the global level to stop crimes such as child prostitution and trafficking.

“Millions of girls and boys worldwide are victims of sexual exploitation, even though this issue in recent years has gained increased visibility,” said Najat Maalla M’jid, the Special Rapporteur on the sale of children, child prostitution and child pornography, as she presented her final report to the 25th session of the Human Rights Council, which opened last week and is to wrap on 28 March.

Social tolerance and impunity, persistent demand and the lucrative aspect of this trade for global criminal networks are only some of the factors that make children increasingly vulnerable, she said, adding that “the ongoing development of new technologies has made access to children in all parts of the world easier and increased exploitation.”

The availability of child pornography online is growing. “Child victims of online sexual exploitation are younger and younger, and the images are more and more horrific,” explained Ms. Maalla M’jid, whose report provides an overview of the main issues and trends relating to her six-year long mandate.

The Special Rapporteur stressed that certain forms of sexual exploitation are increasing such as trafficking of children for sexual and economic purposes, child sex tourism and online child sexual exploitation, but noted that the true scope of the problem was not clear due to inadequate legislation, lack of reliable data, and under-reporting.

“The clandestine nature of such exploitation, the fear of reprisals and stigmatization, as well as the lack of child-sensitive complaints mechanisms, also hampers our understanding of these crimes,” she said.

“The destinations for child sex tourism are continually changing, as perpetrators tend to choose countries with weak legislation and controls,” noted the UN expert.

In her presentation, Ms. Maalla M’jid drew attention to the “serious and long-lasting physical, psychological and social effects, not only for the girls and boys who are the direct victims, but also for their families and communities,” regretting that this impact is not sufficiently understood and taken into account when addressing recovery, remedies and compensation.

“Despite significant efforts and reiterated global commitments, much still needs to be done to protect, rehabilitate and reintegrate victims, provide reparation to children for the damage they have suffered, sanction those responsible, change certain social norms, and to ultimately prevent such exploitation,” the expert said, urging the international community to establish a global response, through a global legal framework and sustainable transnational co-operation.

“Children must also be involved in assessing the scale of the problem and developing solutions,” she added.

♦ Receive daily updates directly in your inbox - Subscribe here to a topic.
♦ Download the UN News app for your iOS or Android devices.
traffic|abuse 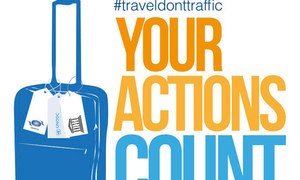 Encouraging travellers to help in the global fight against trafficking in illicit goods and services, three United Nations agencies have joined forces launching today a new campaign aiming to raise awareness among travellers and the tourism industry about making the right ethical choices and reducing demand for illegal products.