UNHCR
Families board a flight at Laayoune, Western Sahara, before departure for Tindouf in Algeria (April 2012).
12 March 2014

The United Nations refugee agency announced today that the family visit flights between Sahrawi refugees living in camps near Tindouf, Algeria, and their families in the territory of Western Sahara are set to resume next month.

The United Nations refugee agency announced today that the family visit flights between Sahrawi refugees living in camps near Tindouf, Algeria, and their families in the territory of Western Sahara are set to resume next month.

“I am pleased that following intensive negotiations a breakthrough was achieved which enables separated families to see each other again,” said UN High Commissioner for Refugees António Guterres.

“It is vital that these visits continue as they increase trust and understanding in one of the world’s longest-standing refugee situations. I urge all the concerned parties to remain committed to this process and UNHCR stands ready to provide support,” he said, referring to the Geneva-based agency which he heads.

Sahrawi refugees started arriving in Algeria in 1975, when fighting broke out between Morocco and the movement known as Frente Polisario, after the Spanish colonial administration of the territory ended.

UNHCR said in a news release that the first series of flights scheduled for 17 April includes four flights suspended in August 2013. The agency is in the process of submitting a list of applicants and the flights schedule for the rest of the year.

The family visits are a key element in a UNHCR programme of confidence-building measures that has been underway since 2004, which also includes a series of seminars to build an environment of confidence and trust to complement the efforts of the UN in finding a political solution.

Nearly 20,000 people have taken part in family visits since the programme began, and 150 people have participated in four seminars supported by the Portuguese Government. The fifth seminar is planned in the Azores, Portugal, on 16 March and the next coordination meeting will be held in Geneva in June.

The UN has been involved in mediation efforts to find a settlement to the Western Sahara dispute, led in recent years by the Secretary-General’s Personal Envoy, Christopher Ross, who has called on both parties to demonstrate flexibility and creativity in working towards a solution.

♦ Receive daily updates directly in your inbox - Subscribe here to a topic.
♦ Download the UN News app for your iOS or Android devices.
sahara

Western Sahara: UN announces next round of informal talks between the parties 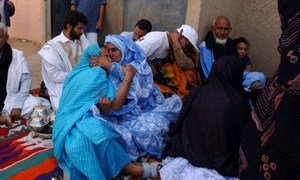 A meeting between the United Nations refugee agency, Morocco, Frente Polisario, Algeria, and Mauritania ended today in Geneva with agreement to expand a programme of family visits between Sahrawi refugees living in camps near Tindouf, Algeria, and their families in the territory of Western Sahara.