11 March 2014
As more and more markets in Pacific Island countries fill their shelves with imported processed foods, healthier locally produced items are being priced out of the market, warned the United Nations Food and Agriculture Organization (FAO) today, encouraging local governments to adopt measures and regulations to help reverse that trend.

Calling for a concerted effort, FAO emphasized that this shift is beginning to negatively affect the health of Pacific islanders, in a discussion paper presented at its 32nd Regional Conference for Asia and the Pacific. It says that “in to restore a viable market for local food producers and reduce demand on imported products, a policy-driven, multi-sector approach is required.”

FAO’s paper notes that greater availability and consumption of local island foods will require action by both public and private sectors, and support from other concerned groups outside the agriculture sector.

Traditionally, food security in the Pacific islands was largely guaranteed by food locally grown, gathered and fished, and was supplemented by income from export products such as copra, cocoa, coffee, sugar and bananas.

While these same foods and incomes remain a pillar of food security today, farmers and fishers from the Pacific islands are having difficulty remaining competitive, both in export and domestic markets. This is largely due to semi-subsistence producers being too poor to buy the modern farm inputs they need to transition into commercial production and distribution. Pacific island countries also generally lack the capacity to process local foods into the “convenience packaged” products that are increasingly popular in urban markets.

FAO explains that the inability to compete is encouraging the next generation of farmers and fishers to leave rural communities in search of new opportunities in urban centres, which implies dramatic diet shifts, from one rich in home-grown carbohydrates, greens and protein to one of imported foods with a high sugar, salt and saturated fat content, it has also resulted in the Pacific islands becoming seriously food-import dependent.

The paper goes on to suggest several policy changes to help local producers: introduction of macro-economic policies to attract investment and reduce the competitiveness of imported foods, soft loans to allow producers to acquire productivity enhancing technologies, tax breaks for the agriculture sector, reduction of tariffs on imported farm machinery, seeds and feed...

“The revenue generated from additional tariffs and taxes on unhealthy imported food products could be invested in greater nutrition awareness campaigns and to improve the relative competiveness of nutritious local foods,” FAO insists. 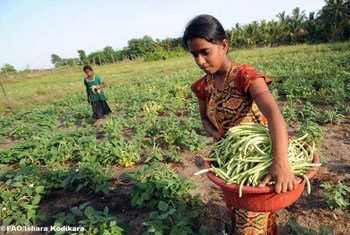 10 March 2014
The United Nations today stressed that Governments in Asia and the Pacific – which has more hungry people than all the other regions of the world combined – should take some major decisions soon about ways to increase food production and address undernourishment.