The head of the United Nations peacekeeping mission in the Democratic Republic of the Congo (DRC) today warned rebel fighters in the country to ‘surrender without delay’ and join the disarmament process or face consequences.

In a statement from the mission, known by its acronym MONUSCO, Special Representative Martin Kobler spoke directly to the Democratic Forces for the Liberation of Rwanda known as FDLR.

“I urge all FDLR rebels to immediately break away from their leaders who are being prosecuted by justice, otherwise they will be forcibly disarmed,” he said, urging rebels to join the disarmament, demobilization, repatriation, reinsertion and reintegration (DDRRR) process.

Mr. Kobler also welcomed the launch of the Congolese Armed Forces’ (FARDC) new operations against the FDLR and affiliated armed groups. The offensive is supported by MONUSCO, which last year was authorized by the Security Council to deploy an intervention brigade to carry out targeted offensive operations, with or without FARDC, against armed groups threatening peace in eastern DRC.

“The operations aim to neutralize the FDLR and their allies. They will also help reestablish State authority, in accordance with our mandate to protect civilians and our rules of engagement,” Mr. Kobler said.

The Security Council has mandated MONSUCO to support Congolese authorities to protect civilians, neutralize armed groups, and implement key reforms to consolidate peace in the country, particularly in the area of security sector reform and rule of law. 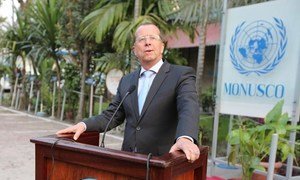 After the intensification of United Nations support to the Democratic Republic of the Congo (DRC) in joint operations against an armed group known as the Allied Democratic Forces, the world body’s envoy to the vast African nation today called on the rebels to lay down their weapons.