OCHA/Jennifer Bose
Behind the signs of early recovery in typhoon-hit regions of the Philippines there are still millions of people who are extremely vulnerable.
10 March 2014

Noting the positive results of the United Nations Food and Agriculture Organization (FAO) response programme in the Philippines following Typhoon Haiyan, the agency’s chief today committed to long-term support for farming and fishing communities, earlier today during a visit to the region.

Four months after the landfall of a typhoon that claimed over 6,000 lives and displaced millions, FAO Director-General José Graziano da Silva is traveling with Filipino Secretary of Agriculture Proceso Alcala, and FAO Philippines Permanent Representative Ambassador Virgilio Reyes, personally distributing bags of fertilizer and tools to affected farmers and fishermen.

"We are committed to ensure that affected populations can build resilience to future disasters and make sure that when the next typhoon hits, they are able to build back better and safer," stated Mr. Graziano da Silva.

Striking between two planting seasons, Haiyan wiped out whole coastal communities, destroying 1.1 million tonnes of ready-to-harvest, harvested and newly planted rice crops. In the weeks immediately following the disaster, the FAO responded to an official Government request and provided 75 percent of the requested rice seeds, allowing 44,000 farming families to plant in time for the December/January planting season. They will soon be harvesting their first rice crop since the typhoon hit the country.

The FAO is also distributing 4,000 tonnes of fertilizer along with 13,000 farming tools, ensuring that more than 80,000 rice farming families can reach their full yield potential which, in turn, would lead to food security and a full recovery.

"Once harvested in March/April of this year, the quality certified rice seed is expected to yield enough to feed around 800,000 people for more than a year. Our rapid response cost around $5 million and will yield $84 million in rice, providing real value for money to donors" said Graziano da Silva.

The livelihood diversification and land use intensification through intercropping and livestock rearing programmes that the FAO is striving to implement will give coconut farmers access to vital income during the 6-8 years it will take for their trees to become fully productive again.

The fisheries sector was one of the most severely affected: with an estimated 30,000 fishing vessels destroyed, nearly 400,000 fisherfolk lost their source of income. Estelita Taboy, representing one of the fishing communities in Basey, stressed that "although the Government has helped [them] to rebuild [their] boats, [they] still need fishing inputs, such as nets, hooks and cages that were all destroyed by the typhoon."

Thanks to the donations of the Governments of Belgium, Ireland, Italy, Norway and Switzerland, the FAO has mobilized $11.7 million as part of its component of the UN's Strategic Response Plan, which represents 31 percent of the $38 million that it appealed for. Ongoing discussions with donors have resulted in total committed funds of more than $30 million. With these funds FAO aims to support 138,000 of the most affected farming and fishing households in the Philippines in the longer term. 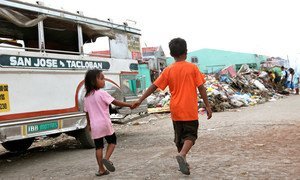 The top United Nations relief official warned today that behind the signs of early recovery in typhoon-hit regions of the Philippines there are still millions of people who are extremely vulnerable, and urged the international community to sustain the emergency response and ensure a smooth transition to long-term development.