UNICEF Philippines/2014/Gpirozzi
Behind the signs of early recovery in typhoon-hit regions of the Philippines there are still millions of people who are extremely vulnerable.
7 March 2014

The top United Nations relief official warned today that behind the signs of early recovery in typhoon-hit regions of the Philippines there are still millions of people who are extremely vulnerable, and urged the international community to sustain the emergency response and ensure a smooth transition to long-term development.

“You can see the signs of early recovery everywhere,” said Under-Secretary-General for Humanitarian Affairs and Emergency Relief Coordinator Valerie Amos, as she briefed reporters in Geneva on the situation in the Philippines four months after Typhoon Haiyan, which tore through the archipelago on 8 November, killing more than 6,000 people and affecting nearly 14 million overall.

Ms. Amos said that when she had visited hard-hit Tacloban a few days after the typhoon, the city had been flattened, the streets were piled high with debris, people were literally just sitting there not knowing what had happened to them, while some were looking for loved ones.

“It is a very different view now, the streets are jammed with traffic, more businesses have reopened, and children are back in school,” she said, but stressed that behind such scenes of early recovery, millions of people still needed assistance.

“Progress has been made, but we need to sustain our response on the emergency side and also make sure that as we transition into early recovery and development that it is done in a way that does not leave a gap,” said the UN humanitarian chief, explaining that shelter remains a major concern in the short term. In terms of longer-term sustainability, she said it is important to support the agriculture and fishing communities.

While during the emergency phase the UN and its partners in the Philippines had helped clear debris from 900 kilometres of roads and 400 kilometres of drainage channels, the task now is to continue to ensure that the most vulnerable people are included in the recovery, because there are millions who continue to need support to rebuild their lives and livelihoods, Ms Amos said.

Her warning was echoed in a press release issued by Abdul Alim, the acting Representative in the Philippines for the UN Children’s Fund (UNICEF). He said that while a growing sense of recovery is notable in the reopening of health centres, clean water flowing again through community taps, and children learning in temporary schools, the needs of children remain great and the signs of destruction brought on by Haiyan persist.

Drawing on data from a new UNICEF report, “Four Months After Typhoon Haiyan,” he said the deadly storm hit some of the country’s poorest areas, where before the disaster, some 40 per cent of children were living in poverty. “Children were amongst the worst affected by the disaster, and they are at the centre of our response…We are now on the long road to full recovery.”

The report documents the work of UNICEF and its partners in providing 930,000 people with access to safe water, and the delivery of hygiene supplies to more than 231,000 children across schools and child-friendly spaces. Some 83,200 children were vaccinated against measles, and 55,300 received vitamin A supplements while 97,000 children were also screened for malnutrition.

But the report also makes clear that the road to recovery is likely to be long. It may be years before communities fully re-emerge from this disaster, and a host of immediate risks still looms largely on children, ranging from epidemic outbreaks, disruption and loss of access to learning, greater exposure to violence, exploitation and abuse, and risks for both women and children of sliding into malnutrition.

UNICEF and its partners are focused on ensuring that aid efforts improve the resilience of affected communities, in addition to providing urgently needed humanitarian assistance and restoring essential services. Relief efforts are targeted at children most in need, and emphasis is placed on help for the 40 worst-affected local government areas.

The agency works hand in hand with Government partners, civil society and communities on the ground, with mechanisms in place to give affected populations a say in the delivery of relief – so help reaches those most vulnerable.

“We are very grateful for the massive global support for those affected by the typhoon, which has made real progress possible and helped save children’s lives,” Mr. Alim said. “So much has been achieved in four months, thanks to the indomitable spirit and hard work of the people of the Philippines, and truly remarkable and generous global support.”

“We know from experience that it takes time and sustained effort to rebuild children’s strength and help them reclaim their lives. UNICEF will be here for the long haul, supporting affected children through the whole recovery process,” he added. 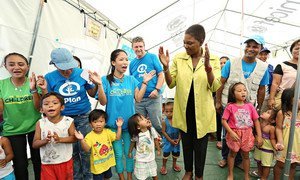 The United Nations and its humanitarian partners are prioritizing shelter and livelihoods projects in the typhoon-devastated parts of the Philippines, while continuing to provide the most vulnerable people with life-saving assistance and protection services.