4 March 2014
As the situation in Ukraine remains in flux, senior United Nations officials in the region and elsewhere in Europe continue to push for a diplomatic solution to the crisis, with Secretary-General Ban Ki-moon today stressing the need for calm and international unity in the pursuit of peace.

Mr. Ban, who is on an official visit to Geneva, met today with Frank-Walter Steinmeier, the Foreign Minister of Germany. According to the UN chief’s spokesman, the two officials discussed the urgent need to de-escalate tensions in Ukraine and facilitate dialogue for a peaceful resolution.

This meeting, in which the Secretary-General and the German Minister agreed that all diplomatic channels must be more actively pursued, follows talks yesterday with Russian Foreign Minister Sergey Lavrov, during which Mr. Ban reiterated that “it is critical to ensure full respect for – and the preservation of – Ukraine’s independence, unity, sovereignty and territorial integrity.”

After months of political unrest, triggered by the Government’s decision last November not to sign an agreement on broader integration with the European Union (EU), Ukraine’s capital, Kiev erupted in violent demonstrations in recent weeks, culminating with the removal by Parliament of President Viktor Yanukovych. Tensions have been mounting in recent days in the Crimea region, where additional Russian troops and armoured vehicles have reportedly been deployed.

The fluid situation led the Security Council to convene an urgent meeting on Saturday, at which the 15-member body was briefed by UN Deputy Secretary-General Jan Eliasson, who said key sites in Crimea such as airports, communications and public buildings, including the regional parliament, reportedly continue to be blocked by unidentified armed men. There are further reports of armed personnel taking control of regional administration buildings in several cities in the East and South of Ukraine.

At the request of the Secretary-General, Mr. Eliasson travelled on Sunday to Ukraine to assess the situation on the ground. Today, according to a UN spokesperson, he met with the acting President, Prime Minister and acting Foreign Minister.

In his meetings, Mr. Eliasson stressed the need for calm and international unity in the pursuit of peace. He also reiterated the Secretary-General's call that Ukraine's territorial integrity should be respected and preserved. Mr. Eliasson also held meetings with diplomatic representatives in Kiev. The Deputy Secretary-General will continue his mission in Ukraine tomorrow.

As part of the mission, Mr. Eliasson has asked UN Special Advisor Robert Serry, who has been in the region since last week, to travel to crisis-gripped Crimea in order to take stock of and evaluate the situation there. Mr. Serry is now departing Kiev and should arrive shortly in Crimea, the spokesperson added. 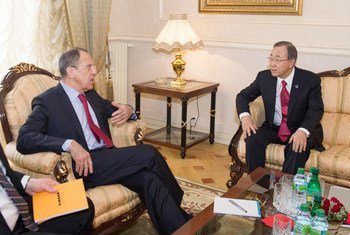