Secretary-General Ban Ki-moon today hailed the “crucial” role of United Nations peacekeepers over the past 50 years in preventing a recurrence of fighting between Greek Cypriot and Turkish Cypriot communities in Cyprus, and hoped both sides will continue to strive for a settlement that will unite the Mediterranean island.

The UN Peacekeeping Force in Cyprus (UNFICYP) was established by the Security Council on 4 March 1964 to contribute to a return to normal conditions following violence and bloodshed between the two communities on the island.

“Over the past 50 years, UNFICYP has played a crucial role in preventing a recurrence of fighting and contributing to the resolution of issues that affect the everyday lives of Cypriots across the island,” Mr. Ban said in a statement marking the anniversary.

He expressed his gratitude to the 32 countries that have contributed either troops or police or both to the mission and their peacekeepers, and paid tribute to the 184 peacekeepers who lost their lives in support of peace in Cyprus.

“I am confident that this fiftieth anniversary will provide much needed impetus to the ongoing negotiations for a comprehensive settlement of the long-lasting Cyprus problem,” the Secretary-General stated.

“I trust that in the period ahead, both sides, with support from the United Nations, will strive for such a comprehensive settlement so that Cyprus may be united again.” 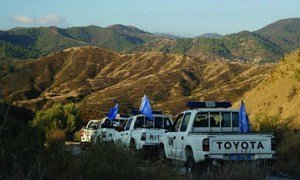