Secretary-General Ban Ki-moon and Russian Foreign Minister Sergey Lavrov discussed the ongoing crisis in Ukraine during a meeting in Geneva today, while deputy United Nations chief Jan Eliasson arrived in Kiev for consultations and the Security Council met in New York to consider the latest developments.

Mr. Ban and Mr. Lavrov discussed the importance of de-escalating the situation by engaging in constructive and meaningful dialogue, according to a readout provided by the Secretary-General’s spokesperson.

The meeting, which took place on the margins of the opening session of the UN Human Rights Council, comes amid growing tensions in Ukraine’s Crimea region, where additional Russian troops and armoured vehicles have reportedly been deployed.

It also follows an urgent meeting of the Security Council on Saturday during which Ukraine’s Ambassador to the UN called on the 15-member body to do everything possible to prevent military intervention by Russia. Yuriy Sergeyev stressed that recent events posed a serious threat to his country’s integrity and to peace and stability in the region.

It was following that meeting that Mr. Ban dispatched Deputy Secretary-General Eliasson to Kiev to get an understanding of the situation on the ground and meet with Ukrainian authorities.

“I have repeatedly emphasized that it is critical to ensure full respect for – and the preservation of – Ukraine’s independence, unity, sovereignty and territorial integrity. It is now of utmost importance to restore calm, to de-escalate tensions immediately through a dialogue,” Mr. Ban told a news conference in Geneva.

The Secretary-General recalled that, in a telephone call with President Vladimir Putin on Saturday, he had urged the Russian leader to address the situation by “engaging constructively” with Ukraine’s authorities.

It is important, he added, that both sides should “lower the temperature,” refrain from rhetoric and engage in dialogue.

Assistant Secretary-General for Political Affairs Oscar Fernandez-Taranco reiterated the UN’s call for calm and dialogue as he briefed the Security Council today, telling the 15-member body that the situation in Ukraine has continued to evolve “rapidly” since Saturday’s meeting.

“We understand that there is a continuing build-up of Russian troops in Crimea and that a number of Ukrainian military bases have been surrounded by Russian troops. In addition, the situation in eastern Ukraine remains fluid with reports of demonstrations in certain cities as well as attempts by local groups to seize control of some official buildings,” he stated.

“As the Secretary-General has underscored in his calls to world leaders, all of us share the urgent responsibility to assist in finding a peaceful resolution in a collaborative effort.” 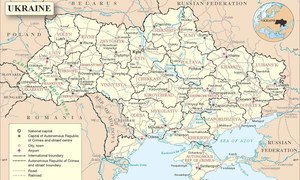 The United Nations announced on Sunday that Deputy Secretary-General Jan Eliasson is heading to Ukraine amid the ongoing crisis in the country to get an understanding of the situation on the ground.