Results of the study, co-authored by the UN and World Bank-supported Global Legislators Organisation (GLOBE) and the Grantham Research Institute at the London School of Economics (LSE), were disclosed yesterday to legislators and senior UN officials in Washington DC.

The new study covers countries responsible for 88 per cent of global carbon emissions. It shows that of those 66 countries, 64 “have progressed or are progressing” on climate change, according to the UN Framework Convention on Climate Change (UNFCC).

“It is no exaggeration to say that the clean revolution we need is being carried forward by legislation,” said UNFCCC Executive Secretary Christiana Figueres. “Domestic legislation is critical because it is the linchpin between action on the ground and the international agreement.”

The meeting comes 18 months ahead global legal climate accord to be signed in Paris. To build momentum and mobilize political will for those talks, Secretary-General Ban Ki-moon will convene a climate change summit this September at UN Headquarters in New York. That meeting will be an opportunity for global leaders from Government, business, finance, and civil society to initiate ambitious joint actions on the ground to reduce emissions and strengthen climate resilience.

At the meeting, held earlier this week, in addition to reviewing the study, participants also discussed how national laws will be recognized within a 2015 international climate change agreement.

In addition to Ms. Figueres, the UN was also represented by the head of the UN Environment Programme (UNEP) Achim Steiner and the UN Assistant Secretary-General, Robert Orr.

Among the 66 countries covered in the study, two began processes to reverse legislation. In Australia, the new Government proposed to repeal aspects of the Clean Energy Act, while Japan announced a lowering of its ambition on climate change in response to its reduced reliance on nuclear energy following the Fukushima accident. 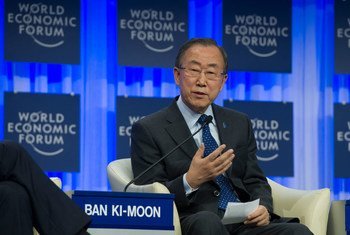 24 January 2014
Secretary-General Ban Ki-moon kept up the drumbeat for business to play its full part in tackling climate change and promoting sustainable development for a second day today, telling the World Economic Forum in Davos that investments now will generate major savings for tomorrow.