UNICEF/Roger Lemoyne
A nurse gives a measles vaccination to a child in Guinea-Bissau.
28 February 2014

An independent United Nations human rights expert today called on authorities in Guinea-Bissau to address the critical needs of the poorest and most marginalized members of society as she wrapped up her first official visit to the West African nation.

An independent United Nations human rights expert today called on authorities in Guinea-Bissau to address the critical needs of the poorest and most marginalized members of society as she wrapped up her first official visit to the West African nation.

“The people of Guinea-Bissau cannot wait any longer for state policies to become effective,” said Magdalena Sepúlveda, the Special Rapporteur on extreme poverty and human rights, adding that authorities must act with the vision to ensure a better life for current and future generations.

“Guinea-Bissau has an opportunity to progress, but it must agree on a common vision which moves the country’s politics away from short-term power struggles and towards working for the well-being of all members of society, especially those living in abject poverty,” she stressed in a news release issued in the capital, Bissau.

With a population of 1.5 million inhabitants, Guinea-Bissau is among the poorest countries in the world. In 2012, it ranked 176th of out 187 countries on the UN Human Development Index. In addition, efforts are underway to restore constitutional order in the country, which is recovering from an April 2012 coup, including presidential elections scheduled for next month.

Ms. Sepúlveda noted that steps adopted to improve the country’s legal framework have had limited success in improving the situation of the poorest. “Development depends on giving priority to investment in social services such as health and education and the strengthening of the agricultural sector to ensure food security,” she stressed.

The expert was struck by the extent to which the social and financial well-being of the community and households rely entirely on women. “Women and girls are Guinea-Bissau’s foundational pillar, yet their reward is a neglect of their rights and needs,” she said.

Despite their “tireless efforts” to secure the well-being of their families and communities, women and girls have limited access to education, health and justice and are victims of sexual violence, exploitation, forced marriage and adolescent pregnancies.

“The incidence of women living with HIV/AIDS and rates for maternal mortality in Guinea-Bissau are among the worst in the world,” she stated.

Ms. Sepúlveda will present a full report on Guinea-Bissau to the Council this June. 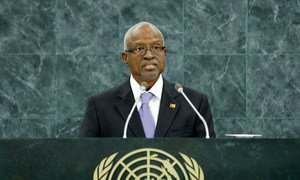 Speaking at the United Nations General Assembly today, the transitional President of Guinea-Bissau, which is recovering from a 2012 coup, said that national elections have been scheduled for November 2013, but that the fight against the cycle of poverty and instability continues.