FAO/Ami Vitale
Conflict, rapid population growth and a heavy reliance on food imports pose serious challenges for food security in the Near East and North Africa.

27 February 2014
Conflict, the flow of refugees and migration are worsening food security in the Near East, along with constraints on food production and a growing dependence on imports, the head of the United Nations Food and Agriculture Organization (FAO) told a conference in Rome today.

“We know that there is an intrinsic link between peace and food security, and between hunger and conflict,” Director-General José Graziano da Silva said, as he opened the two-day ministerial segment of FAO’s Regional Conference for the Near East and North Africa.

He noted that worsening food security in the region is largely driven by factors such as conflicts, the flow of refugees and migration, especially of young people looking for opportunities in other countries.

“All of these are issues that are not withheld by national borders. They affect the region as a whole and have repercussions far beyond it as well,” said Mr. Graziano da Silva.

He also noted that the Millennium Development Goal (MDG) target to reduce by half the proportion of hungry people between 1990 and 2015 is still within reach at the global scale and in the Near East and North Africa.

However, a “final push” in the last 672 days before the deadline is needed, he added.

Algeria, Djibouti, Jordan, Kuwait, Kyrgyzstan, Morocco and Turkmenistan are among countries that have already met the Millennium Development Goal (MDG) target. In addition, Egypt, Iran, Lebanon, Libya, Saudi Arabia, Tunisia and the United Arab Emirates already had undernourishment levels below 5 per cent in 1990, the baseline for the Goals.

Noting that 2014 is the International Year of Family Farming, he encouraged countries to increase support to family farmers in the region by ensuring access to adequate technologies, financial services, markets, and natural resources such as land and water.

He also encouraged countries to participate in discussions on the Committee on World Food Security’s proposed Principles for Responsible Agricultural Investments, which will help to ensure investments contribute to the development of family farmers. 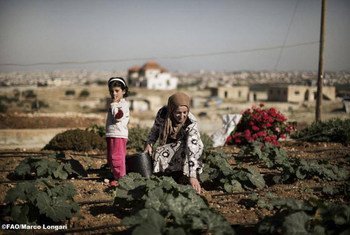 20 February 2014
The United Nations Food and Agriculture Organization (FAO) today warned that water scarcity is one of the most urgent food security issues facing countries of the Near East and North Africa, with fresh water availability in the region expected to drop by 50 per cent by 2050.