IRIN/John James
Voting in first round presidential polls in Guinea-Bissau. A military coup scuppered the run-off in April 2012.

26 February 2014
The United Nations Security Council urged Guinea-Bissau and the international community to redouble efforts aimed at preparing for the long delayed elections which have been postponed yet again, and reiterated that they are willing to use targeted sanctions against civilian and military individuals who undermine efforts to restore the constitutional order.

In a statement to the press after its discussions, the 15-member Council expressed concern at the continuing delays in the legislative and presidential elections, which have recently been postponed to 13 April from 16 March, according to a decree signed by interim President Manuel Serifo Nhamadjo.

“Such delays have a negative impact on the country’s social and economic well-being, and on the already fragile security, humanitarian and human rights situation in Guinea-Bissau,” the Council said.

Members also urged authorities in charge of the transitional period to create a conducive environment for the “safe, full and equal” participation of all actors, including women.

In today’s statement, the Council condemned violence in Guinea-Bissau, which has “contributed to atmosphere of fear and intimidation among the population.” and reiterated its concern about the prevailing culture of impunity and lack of accountability in the country.

They also called on all stakeholders, including political parties, defense and security forces, and civil society organizations and traditional leaders “to refrain from any action that could hamper the electoral process, to facilitate the conduct of peaceful and credible elections, and to respect the election results as an expression of the will of the people.”

Specifically, the Council called on the military to respect the constitutional order, including the electoral process, and “to submit themselves fully to civilian control.”

Constitutional order has still not been restored in Guinea-Bissau, which is recovering from an April 2012 coup in which soldiers loyal to General Antonio Injai, toppled the Government ahead of the days before a runoff election that was expected to go to then Prime Minister Carlos Gomes Junior.

During the Security Council meeting earlier in the day, Jose Ramos-Horta, the Secretary-General’s Special Representative for Guinea-Bissau, urged the defense and security forces from interfering in the forthcoming elections and to protect the candidates.

In a videoconference, Mr. Ramos-Horta, who is also head of the UN political mission in Guinea-Bissau (UNIOGBIS), called for intensive international support for the country after the elections.

Also briefing the Council, Ambassador Antonio de Aguiar Patriota of Brazil, the Chairperson of the Guinea-Bissau Configuration of the UN Peacebuilding Commission, noted that the impact of the political instability on the country’s economy is “devastating”. He noted that there was “a widespread sense of weariness in the country” and that “people wanted to move on.”

He echoed Mr. Ramos-Horta’s call for international support after the polls close, and also detailed a three-prong approach that includes modernizing the security sector.

In his briefing, the Ambassador also warned that international crime and drug trafficking remain major concerns, with the emerging threat caused by irregular fishing and logging licenses. 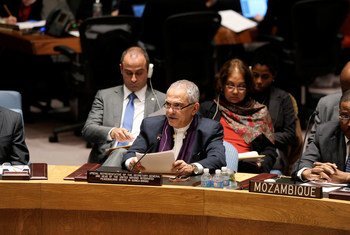 26 November 2013
The holding of credible and peaceful elections next year is vital for the process of restoring constitutional order in Guinea-Bissau, a United Nations envoy told the Security Council today, urging continued international support to help the West African nation complete this process.