Journey to the centre of the earth: UN peacekeepers aid volcanologists in DR Congo

UN Photo
Standing on the rim of Nyamuragira volcano near Goma, Democratic Republic of the Congo (DRC). MONUSCO has been supporting scientific research on the volcano.
25 February 2014

Breaking through clouds of smoke, a United Nations helicopter flying a team of scientists over eastern Democratic Republic of the Congo (DRC) dipped near the mouth of Nyamuragira, one of Africa's most active yet least studied volcanoes, which threatens to potentially turn Goma into Pompeii.

The expedition, conducted earlier this month, is a different facet of “civilian protection” for the UN Mission in the country, known by its French acronym MONUSCO. It aims to understand if the increasing plume of the volcano is also related to an increase of available volumes of magma at the surface. If so, the greater the chance of the volcano erupting.

“In casese two volcanoes would erupt without a warning from the local scientific institution, it would surely [be] the most dramatic natural disaster catastrophe in recent years,” said Dario Tedesco, the lead scientist on the UN-supported visit, which included a stop at nearby Mount Nyiragongo, which, together with Nyamuragira are responsible for the majority of Africa's historical volcanic eruptions.

“This is the reason why most actors, UN and European Union (EU) above all, are helping and increasing technical and scientific capacities of local researchers.”

The study – carried out in partnership with the Goma Volcano Observatory (GVO) and UN partnering International Organization for Migration (IOM) and the Second University of Naples in Italy with which Mr. Tedesco is affiliated – is one of several in which MONUSCO helps in gathering data for use by humanitarian agencies and provincial authorities about Nyamulagira and Mount Nyiragongo.

“This situation is making it difficult, even impossible, to work next to the volcanoes and led us to quit most of the surveillance points in order to avoid possible looting as occurred in 2007,” Mr. Tedesco said, referring to ongoing fighting in and around flashpoint city of Goma, which lies at the feet of the volcanos.

Scientists have expressed concern about potential dangers not just to Goma but the land under it and Lake Kivu adjacent to it. The lake conceals underwater concentrations of carbon dioxide and methane. If Nyamuragira blows, it could release a lethal cloud of gas across the area that would kill anyone who managed to escape the volcanic eruption.

In addition to assisting with logistics for the scientific visit, MONUSCO has also been working with local authorities to create a contingency plan in the the event that the wider area has to be evacuated quickly.

Nyiragongo, which means “the smoker” in the local language, and Nyamulagira, “the commander”, also have a mythical significance as the ancestral home of the dead that strive to stir up the flames of the mountain, according to local beliefs.

Nyiragongo and Nyamulagira have gone through several eruptions since 1880. On 17 January 2002, the two-mile high Nyiragongo spilled more than 15 million cubic yards of lava into Goma, destroyed an estimated 14,000 homes forcing some 350,000 people to flee.

GVO researchers, accompanied by Mr. Dario, landed on the Nyamuragira and spent four hours collecting rocks and gas samples which will be analyzed in Italy.

Recent fighting between the Government and a variety of rebel and sectarian groups continues to devastate the eastern regions, particularly North and South Kivu provinces. According to the UN Office for the Coordination of Humanitarian Affairs (OCHA), 2.9 million people are currently displaced by conflict within DRC, more than 60 per cent of them in North and South Kivu. 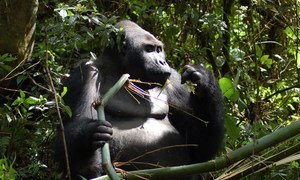 In the Democratic Republic of the Congo (DRC), where the United Nations has been supporting efforts to end armed violence, protect civilians and spur economic investment and political stability, the Organization is also fighting an environmental battle to save great apes, the region’s iconic local totem and a key link in its rich biodiversity.