25 February 2014
The Middle East peace process is nearing a defining moment, the top United Nations political chief today told the Security Council today urging Governments to back the peace agenda and to raise awareness of the benefits of peace among their constituents.

Under-Secretary-General for Political Affairs Jeffrey Feltman told the 15-member Council that direct negotiations between the Israelis and the Palestinians, which resumed in August of last year following efforts by United States Secretary of State John Kerry, have opened “a credible political horizon for achieving the two-state solution.”

He urged that they continue to be supported by regional stakeholders, underlining the importance of the Arab Peace Initiative.

“Any genuine intention to pursue peace requires strong leadership,” Mr. Feltman said. He noted that for Palestinians, a negotiated peace settlement “holds the promise of becoming a fully recognized Member State,” while for Israel, “the security and recognition it deserves in the region and beyond.”

In the West Bank, where the situation on the ground remains “fragile,” he noted increased clashes in and around Palestinian refugee camps, and reports of Israeli forces foiling alleged terrorist attacks originating from the area.

Clashes were also reported by settlers on Palestinian property, with the UN registering increased funding and incentives by Israeli Government for existing settlements, including in occupied East Jerusalem.

The UN is “deeply concerned by the ongoing demolition of Palestinian residential and livelihood structures in Area C, particularly in the Jordan Valley and East Jerusalem,” Mr. Feltman said, where 175 Palestinians have been displaced in this reporting period.

Turning to Gaza, Mr. Feltman stressed that only the reunification of Gaza and the West Bank under the legitimate Palestinian Authority based on the PLO commitments can pave the way to a durable solution for Gaza as part of political progress towards peace.

“Gaza too must reap the peace dividends of a negotiated two-state solution,” the senior UN official noted.

In his briefing, he detailed “troubling signs” that a ceasefire signed in November 2012 is eroding, with an increase in hostilities and barriers to entry for people and goods.

“We are deeply concerned about this rise in violence and call on all parties to act in accordance with international law,” Mr. Feltman said which included 44 rockets and mortars fired into Israel, and six incursions and seven airstrikes from the Israeli side.

The humanitarian situation in Gaza continues to deteriorate. At this point, if the UN Relief and Works Agency for Palestine Refugees in the Near East (UNRWA) does not obtain $30 million for which it has appealed, it will not sustain critical emergency operations.

In Syria, Mr. Feltman said that the progress in the talks in Geneva has thus far been “limited” confirming the deep rift between the two sides.”

Still, it is no small feat that these long-awaited negotiations have finally begun, and both sides remain committed to sitting at the table, he added.

The situation in the Golan continues to be of deep concern. Peacekeepers serving with UNDOF operate have been in the areas since the 1974 disengagement accord between Syria and Israel.

Among hostilities cited by Mr. Feltman, he said the UN was looking into reports of an airstrike yesterday in the border area between Lebanon and Syria and urge all parties to avoid escalation.

“These developments have potential to escalate and to jeopardise the ceasefire between Israel and Syria as well as heighten tensions between Lebanon and Israel,” he warned.

Meanwhile, in Lebanon, Mr. Feltman noted the formation of a government of “national interest”, and called it “a positive development against a backdrop of continued tensions stemming from a spate of deadly terrorist attacks.” 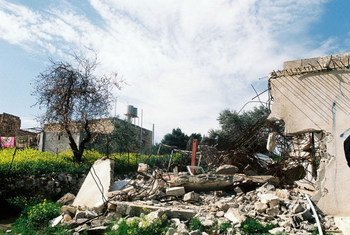 31 January 2014
A senior United Nations relief official today called for a halt to the displacement of Palestinians in the Jordan Valley, after 66 people, including 36 children, were uprooted in the latest round of Israeli demolitions in the area.