A Syrian refugee family in southern Turkey, where more than 20,000 people have fled to so far in early 2014 to escape fighting. UNHCR Photo
25 February 2014

As the conflict that has inflicted unimaginable suffering on the Syrian people prepares to enter its fourth year, United Nations officials today stressed the need for a political solution to end the crisis, as well as greater efforts to protect civilians and ensure they receive the assistance they desperately need.

“We are in a race against time. More people are slipping out of our reach as the conflict intensifies and armed groups fragment and more battle lines are drawn,” said Assistant Secretary-General for Humanitarian Affairs and Deputy Emergency Relief Coordinator Kyung-wha Kang.

Ms. Kang, one of several senior UN officials who briefed the General Assembly on the humanitarian situation in Syria, cited the need to ensure that civilians are protected and able to receive the assistance they need.

Today’s briefing comes on the heels of the Security Council’s adoption on Saturday of a resolution demanding “rapid, safe and unhindered” humanitarian access for UN agencies and their partners, including across conflict lines and across borders.

Three years of conflict have resulted in well over 100,000 deaths, and more than 680,000 people have been injured. More than 9.3 million people are in need of assistance inside Syria, including at least 6.5 million who are internally displaced. The conflict has also spawned a refugee crisis in which nearly 2.5 million people have are being sheltered in neighbouring countries.

“These numbers grow every day and have become routine news,” noted Ms. Kang. “Perhaps they no longer shock, but they must. It is critical that we remember that behind each number is a family, a child whose life has been ended or devastated.”

High Commissioner for Refugees Guterres, speaking via videoconference, noted that five years ago, Syria was the world’s second largest refugee-hosting country. Syrians are now about to replace Afghans as the present biggest refugee population worldwide.

“Neighbouring countries have provided them with safety since the beginning with enormous costs to themselves. Few refugee influxes have ever generated this profound an impact on their host countries with such dramatic demographic, economic and social consequences,” he said.

“The human tragedies this conflict has created are ghastly and although refugees may have found shelter from the fighting by crossing the border, they have not escaped their trauma and psychological wounds,” he added.

Mr. Guterres appealed for more international support to Syria’s neighbours, including strong financial assistance; for all countries, especially those beyond the region, to allow Syrians to find refuge on their territories; and for more third countries to provide Syrian refugees with additional forms of protection, including resettlement.

The conflict has also been marked by growing evidence of war crimes, crimes against humanity and gross human rights violations by Government forces and armed opposition groups, High Commissioner for Human Rights Navi Pillay told the 193-member body in a video briefing.

“The perpetrators of these appalling crimes act in defiance of law and the international community, without fear of accountability,” she noted. “Referral to justice is imperative for future hopes of peace. Today, I repeat again my call to the Security Council to refer the Syrian crisis to the International Criminal Court.”

Ms. Pillay added that the international community, led by the General Assembly, must support an immediate end to one of the most tragic human rights and humanitarian crises of our time. “The failure to achieve a comprehensive ceasefire, and accompanying violations, should weigh heavily on our conscience.”

Margaret Chan, Director-General of the World Health Organization (WHO), reported that the long duration of the conflict has created a crisis for health. “The health needs of the Syrian people are enormous, as is their suffering… Health needs have skyrocketed at a time when domestic capacity to respond has been decimated.”

She noted that Syria’s previously “excellent” health system has collapsed: more than half of the public hospitals have been damaged, many of them no longer functioning; a once vibrant pharmaceutical manufacturing industry has nearly ceased operations, resulting in severe shortages of drugs; and immunization programmes have been disrupted, leaving young people vulnerable to entirely preventable diseases.

“The suffering of the Syrian people is reflected in increased mental health disorders, food shortages, under-nutrition, and an increase in sexual violence,” Dr. Chan said, as she appealed to all parties in the conflict to respect the integrity and neutrality of health facilities and ensure the protection of healthcare workers and patients, in line with their international legal obligations.

Noting that the scale and severity of humanitarian suffering in Syria is growing daily, Secretary-General Ban Ki-moon called on the Syrian Government to authorize more humanitarian staff and partners to work inside the country.

“It is not credible to cite bureaucratic procedures as reasons for delay when it is the Government itself that controls those procedures,” he pointed out. Mr. Ban also called for an end to the indiscriminate use of barrel bombs and other aerial bombardments of urban centres; safe passage for humanitarian supplies along key routes; and more funds for the humanitarian response inside Syria and for those countries hosting people who have fled. 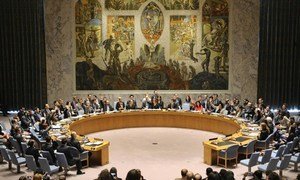 The United Nations Security Council today unanimously approved a resolution to boost humanitarian aid access in Syria, a move Secretary-General Ban Ki-moon said can ease some civilian suffering, if it is implemented quickly and in good faith