UN Photo/JC McIlwaine
President of the Swiss Confederation and Chairperson-in-Office of the Organization for Security and Co-operation in Europe (OSCE).

24 February 2014
Security in Europe cannot be taken for granted, as illustrated by the political crisis and recent escalation of violence in Ukraine, the head of the world’s largest regional security grouping said today, as he outlined areas for closer cooperation between the Organization for Security and Cooperation in Europe (OSCE) and the United Nations.

“These developments have revealed the need to foster dialogue, re-establish trust, and rebuild bridges both within Ukraine and across the Euro-Atlantic and Eurasian region,” said Didier Burkhalter, Chairperson-in-Office of the OSCE and President of the Swiss Confederation.

In his briefing to the Security Council, Mr. Burkhalter proposed establishing an International Contact Group on Ukraine, which has been witnessing mass protests and deadly clashes for several months, culminating in the removal of its President on Saturday by Parliament.

“We are currently witnessing a phase of de-escalation in Ukraine,” he stated. “It is essential to support a fair and inclusive process of transition which does not marginalize any part of Ukraine or any community. Ukraine deserves full international attention and support.”

Mr. Burkhalter went on to outline several areas for greater collaboration between the OSCE and the UN, noting that such cooperation significantly increases the impact of the good work that is being done on the ground.

“Regional organizations need to play a leading role in implementing on the ground the commitments undertaken in the context of the UN,” he stated.

“This is precisely why we have decided to focus our efforts on better implementation. International instruments for human rights, democracy and the rule of law as well as conventions and political commitments can only help improve people’s lives if their implementation is accepted and promoted by States at national level. Organizations like the UN and the OSCE should do everything possible to support States in these efforts.”

He noted that the OSCE is working in close cooperation with UN bodies on issues such as climate change, disaster risk reduction, the prevention of torture, and the fight against terrorism.

“We are eager to intensify the dialogue between our organizations. My hope is that we will succeed in translating many ideas for further cooperation into successful projects.”

Based in Vienna, Austria, the OSCE comprises 57 States stretching from the United States across Europe and Central Asia to the borders of China.

In a message to the OSCE’s 20th Ministerial Council, held last December in the Ukrainian capital, Kiev, Secretary-General Ban Ki-moon hailed the work done by the regional body and noted the intensive cooperation that already exists between the two organizations, from Central Asia to the South Caucasus and South-eastern Europe.

“The OSCE is a vital partner for the United Nations. I look forward to our continued cooperation, from immediate crises to longer-term issues such as combating climate change, eradicating poverty and shaping an ambitious sustainable development agenda for the post-2015 period,” he stated. 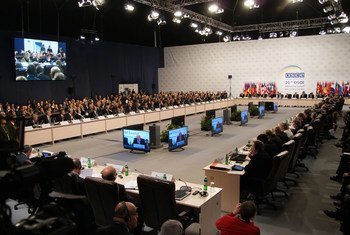 5 December 2013
Secretary-General Ban Ki-moon today hailed the vital partnership between the United Nations and the Organization for Security and Cooperation in Europe (OSCE), stressing in particular the regional body’s role in averting conflict and advancing peace and development.