UNICEF/NYHQ2013-1015/Romenzi
Over one million Syrian children are living as refugees like this young boy outside the Kawergosk camp, just west of Erbil, Iraq.
24 February 2014

Moved by the dire plight of more than 5 million war-traumatized Syrian children – both inside and outside the country – United Nations agencies and their partners today joined forces to urge the world to demand an end to the “relentless horror and suffering” those children face before an entire generation is lost.

The UN Children’s Fund (UNICEF), the UN High Commissioner for Refugees (UNHCR), Mercy Corps, Save the Children and World Vision have issued an impassioned appeal to engage at least 1 million voices of support before the war in Syria reaches the end of its third year on 15 March.

The organizations are calling for the public to join in a massive call for action, hosted on www.change.org (http://bit.ly/nolostgeneration). The appeal is directed at all those who have the responsibility and the ability to bring an end to the suffering of children and safeguard their future.

This call to action is the latest endeavour by the UN and its humanitarian partners to sound a global alarm about the impacts of the ongoing bloodshed, homelessness and missed education on Syrian children amidst a civil war that has killed well over 100,000 people and driven an estimated 9 million others from their homes since fighting erupted between Syrian President Bashar al-Assad and various groups seeking his ouster nearly three years ago.

On 7 January, UNICEF, UNHCR and many of the same organizations appealed for $1 billion to save millions of Syrian children from becoming a lost generation, doomed by the civil war in their country to a life of despair, diminished opportunities and broken futures.

"The future for these children is slipping away, but there is still a chance to save them," UN High Commissioner for Refugees António Guterres had stated at the unveiling of the “No Lost Generation" initiative in Geneva. "The world must answer this crisis with immediate, massive international support."

Last Thursday, UNICEF launched a $2.2 billion appeal to help nearly 60 million children in crisis situations worldwide, with the majority of the funds destined to tackle the impact of the crisis in Syria and the sub-region. Almost 40 per cent, or $835 million, will be earmarked for immunizations, as well as water and sanitation, education, and protection projects.

Today’s call to action comes in the wake of the adoption on Saturday of a resolution by the UN Security Council demanding that “all parties, in particular the Syrian authorities, promptly allow rapid, safe and unhindered humanitarian access for UN humanitarian agencies and their implementing partners, including across conflict lines and across borders." The wide-ranging text strongly condemned “grave violations and abuses committed against children” in contravention of international law.

Along with the immediate protection of children, today’s appeal stresses the importance of breaking the cycle of violence and providing children and young people with the support they need now to play a constructive role in the future peace and stability of Syria and the region.

The five demands set out by the organizations are: an end to violence against the children of Syria backed by calls on all those involved in the fighting to commit to resolving the conflict peacefully; an end to blocking of humanitarian assistance; an end to attacks on humanitarian workers and facilities – especially schools and hospitals; a renewed commitment to reconciliation and tolerance – led by all communities affected by the conflict, involving children and young people; and more investment in the education and psychological protection of all children affected by the conflict. 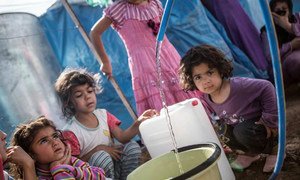 The United Nations today launched a $2.2 billion appeal to help nearly 60 million children in crisis situations, the majority of whom are in and around war-torn Syria.