UN Photo/Isaac Billy
A view of the deserted streets in the town of Malakal, in the Upper Nile State of South Sudan, with Government troops on patrol in late January 2014.

21 February 2014
A new United Nations report released today outlines the human rights abuses committed by both sides in the conflict that erupted in South Sudan at the end of last year, including rapes, mass killings and torture, and warned that civilians in the world’s youngest nation are continuing to be targeted.

“It is clear that civilians bore the brunt of much of the fighting and that gross violations of human rights were committed,” states the interim report prepared by the UN Mission in South Sudan (UNMISS) for the Security Council.

The report provides an initial account of human rights violations and atrocities perpetrated during the hostilities that engulfed South Sudan between 15 December 2013 and the end of January 2014, as documented by the Mission.

It focuses on alleged human rights abuses that occurred in the four states of South Sudan that have seen the heaviest fighting to date – Central Equatoria, Jonglei, Unity and Upper Nile – between forces loyal to President Salva Kiir, who belongs to the Dinka ethnic group, and former deputy president Riek Machar, who belongs to the Lou Nuer.

“Numerous witnesses reported the deliberate targeting of both national and foreign civilians in extrajudicial and other unlawful killings, including mass killings, enforced disappearances, gender-based violence, such as rapes and gang rapes, and instances of ill-treatment and torture by forces from both sides of the conflict,” the Mission said in a news release.

The report notes that large numbers of civilians were deliberately targeted and killed along ethnic lines and many more were displaced for similar reasons. For example, soldiers of the Sudan People’s Liberation Army (SPLA) reportedly engaged in killings of Nuer residents of Juba during the initial 72 hours of the crisis in mid-December.

The Mission noted with deep regret that civilians have continued to be targeted and killed in the conflict in South Sudan. Fresh evidence of continuing human rights abuses surfaced during the recent battle for control of the Upper Nile state capital of Malakal.

An UNMISS patrol visited the city centre yesterday and collected eyewitness testimony from residents alleging that armed opposition forces targeted and killed 10 unarmed civilians at the Malakal Teaching Hospital on the basis of their ethnic background on 19 February.

UNMISS staff in Malakal also witnessed the extra-judicial execution of two children outside the perimeter of the UN compound yesterday by armed youths believed to be allied with armed opposition forces. The Mission strongly condemned the continuing perpetration of such human rights abuses and called on all parties to the current crisis to desist from committing additional atrocities.

UNMISS reported today that the patrol that visited Malakal found that it “had been looted and appeared to be generally empty of civilians.” The Mission reported more sporadic fighting close to its compound today.

Secretary-General Ban Ki-moon, in statement issued by his spokesperson yesterday, noted with deep concern the reports of renewed fighting in Malakal and “the catastrophic consequences for civilian populations.” He urged all parties to abide by the ceasefire that was agreed in late January, to respect international humanitarian law, and ensure that civilians are protected.

The human rights report also points to increased ethnic polarization in the wake of the crisis in South Sudan and the wide divergence in perceptions about the scope and magnitude of the human rights violations and abuses, “which make it challenging to discern the truth.”

Holding perpetrators to account is crucial not only for ensuring respect for human rights but also as a means to address the underlying causes of the country’s current crisis, it states.

“Accountability is crucial for a national reconciliation process to take root and succeed,” said Hilde Johnson, the Secretary-General’s Special Representative for South Sudan and head of UNMISS. “Without bringing to justice the perpetrators of these horrendous crimes, revenge and impunity is likely to lead to a perpetual cycle of violence.”

Attack on presidential compound in Mogadishu condemned by UN officials 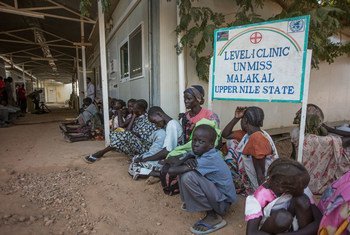 18 February 2014
The United Nations peacekeeping mission in South Sudan (UNMISS) has reported that heavy fighting broke out earlier today between pro-Government and opposition forces near its compound in the Upper Nile state town of Malakal, while condemning those who instigated the inter-communal violence that flared up inside its base.