21 February 2014
Secretary-General Ban Ki-moon today hailed former New York City Mayor Michael Bloomberg’s efforts on the environment, adding that the leadership of the new United Nations Special Envoy for Cities and Climate Change will be vital for an upcoming summit on the issue.

“I am sure that we will be able to benefit a lot from his experience, his global visibility and global leadership,” Mr. Ban said as the two men met at UN Headquarters, adding that the world body needs such “dedicated and visionary leadership” to address the climate change challenge.

Mr. Bloomberg, who left the Mayor’s Office in December after 12 years in the job, currently serves as the President of the Board of the C40 Climate Leadership Group, a network of large cities from around the world committed to implementing meaningful and sustainable climate-related actions locally that will help address climate change globally.

The Secretary-General appointed him as Special Envoy last month to galvanize urban action to reduce greenhouse emissions ahead of the UN climate summit slated for 23 September.

Mr. Ban noted that, in addition to his many philanthropic efforts, Mr. Bloomberg is also well known for his “strong stewardship” on environment and climate change.

“He has made this great city of New York a carbon-free city. It has been his hallmark, and as President of the C40 Mayors Group for Climate Change, he has been making a great contribution to a global effort, together with the United Nations, to make this Planet Earth and our world environmentally sustainable,” said the Secretary-General.

Recalling how seriously New York was affected by Hurricane Sandy in 2012, Mr. Ban noted that such megacities are very vulnerable to the impact of climate change.

At the same time, places such as New York can offer lessons on how to make cities more resilient against the impacts of climate change, including through measures dealing with land use, transit, building codes and sustainable energy.

Mr. Bloomberg has been tasked with assisting the Secretary-General in his consultations with mayors and related key stakeholders to raise political will and mobilize action among cities as part of his long-term strategy to advance efforts on climate change, including bringing concrete solutions to September’s climate summit.

“I really count on your strong support and leadership,” Mr. Ban told his envoy. 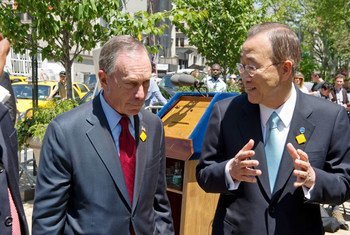