The independent United Nations expert tasked with monitoring the human rights situation in Myanmar today welcomed the improvements that have been made, but highlighted a number of challenges that, if left unaddressed, could jeopardize the country’s entire reform process.

“I believe there is limited space for backtracking, though – as a senior Government official admitted to me in Nay Pyi Taw – the democratic transition is still fragile,” stated Special Rapporteur Tomás Ojea Quintana, as he concluded his last official mission to the country.

The South-east Asian nation has witnessed a number of positive changes since President Thein Sein initiated a series of reforms two years ago after the establishment of a new Government.

Mr. Ojea Quintana, who has served in his post for six years, hailed some of these positive developments, such as the release of prisoners of conscience, the opening up of space for freedom of expression, the development of political freedoms, and important progress in securing an end to fighting in the ethnic border areas.

He warned, however, that the military retains a prevailing role in the life and institutions of Myanmar for the time being, noting that “State institutions in general remain unaccountable and the judiciary is not yet functioning as an independent branch of Government.”

“Moreover, the rule of law cannot yet be said to exist in Myanmar,” the expert said, adding that the current situation in Rakhine state – which has been the scene of waves of Buddhist-Muslim violence – still represents a particular obstacle and a threat to the reform process.

During his visit, Mr. Ojea Quintana became the first human rights rapporteur to visit Laiza in Kachin state, where he saw villages that had been abandoned over the years by those fleeing advancing military troops.

“The visit to Laiza brought home to me how closely related the fighting is with serious human rights violations, and the importance of securing a national ceasefire accord in the coming months.” In January 2013, the Government announced a unilateral ceasefire following a three-week offensive against ethnic Kachin rebels.

The expert commended progress towards a national ceasefire accord, which could be signed by April. “A critical challenge will be to secure ceasefire and political agreements with ethnic minority groups, so that Myanmar can finally transform into a peaceful multi-ethnic and multi-religious society,” he stated.

On the Constitution, he said that reform was necessary to “embrace the aspirations of the ethnic communities,” and to “address the undemocratic powers granted to the military and further democratize parliament, upholding the right of people to choose their own government and president.”

Among other things, the expert called for a change of mind-set within all levels of Government, to allow civil society, political parties and a free media to flourish beyond the limited freedoms that have currently been granted.

“Detaining journalists for the coverage of sensitive stories is something that belongs in Myanmar’s past,” he stressed.

Mr. Ojea Quintana’s full report on Myanmar will be presented to the Council next month. 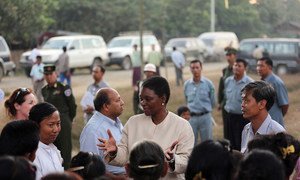