18 February 2014
Family farming is an important path for inclusion for millions of poor rural communities, and is of special importance for women and for youth, the head of the United Nations Food and Agricultural Organization (FAO) has said, hailing the expansion of a youth gardening project in Africa as a vital way to promote nutrition and sustainability, as well as inclusivity.

FAO Director-General José Graziano da Silva made these observations in Milan where yesterday the Italy-based Slow Food Foundation for Biodiversity project outlined its plans to help African youths plant 10,000 food gardens. The project, backed by FAO, has led to the planting of one-thousand gardens so far, in more than 350 communities in 38 countries.

Lauding the project as a paradigm shift in farming, Mr. Graziano da Silva said that food gardens produce far more than simply food, "they promote inclusion, teach sustainability, and offer a space where the youth of today can meet, learn, share and build social capital."

By transferring traditional knowledge from one generation to the next, the Director-General asserted that the project opens the door to "opportunities to decent jobs and a dignified life."

According to FAO, roughly one-quarter of an estimated 842 million people who are chronically hungry in the world live in Africa. While poor farmers were once seen as a problem, through people and Governments that better understand their needs and offer support, family farmers have become part of the solution – with promising results.

"Family farming is an important path for inclusion for millions of poor rural families and communities, and are of special importance for women and for youth," Mr. Graziano da Silva explained, pointing out that two-thirds of the population of Africa is rural and 3 out of every 4 Africans were 25 years of age or younger.

"Projects such as the one that is being presented today show that it is possible to achieve sustainable food and agricultural systems if we are all committed – farmers, researchers, schools, students, nutritionists, consumers and chefs," maintained the Director-General.

Increasing food gardening among youth in Africa is especially fitting for 2014, which is being observed as the UN International Year of Family Farming. In 2013, FAO and the International Slow Food organization agreed to develop joint actions to improve the livelihoods of smallholders and others working in rural areas.

Under a three-year Memorandum of Agreement signed in Milan, the two organizations will join forces to promote more inclusive food and agriculture systems at local, national and international levels.

The Slow Food organization has already planted one-thousand gardens in more than 350 communities in 38 countries… and with the UN, the number continues to grow. 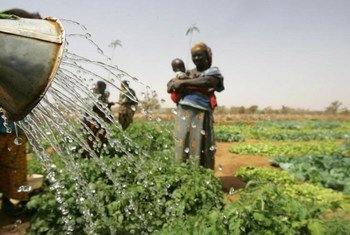 12 February 2014
Rural development is key to Africa’s prosperity, yet it has been undervalued by Governments, international lenders and policy advisers, the UN International Labour Organization (ILO) said in a paper released today, calling for increased investment in the field.