“There has been no change in the situation,” said Christopher Gunness, spokesperson for the UN Relief and Works Agency for Palestine Refugees in the Near East (UNRWA), lamenting that the agency's food distribution inside Yarmouk camp, south of crisis-torn Syria's capital, remained on hold for the tenth consecutive day.

While no UNRWA staff visited the camp today, Mr. Gunness said the agency remains hopeful that unrestricted humanitarian access to the civilian population inside Yarmouk will be granted and that its food distribution will resume without further delay.

UNRWA has not had access to the camp since fighting broke out late at night on 7 February, forcing the agency to temporarily suspend its activities. A food parcel lasts an average family about 10 days, so provisions are now running out, Mr. Gunness explained earlier, adding that, “as malnutrition…is reportedly widespread, the fate particularly of women and children is of growing concern.”

He said today that UNRWA “strongly appeals” to the authorities and concerned parties to consider the immense needs of the civilian population in Yarmouk and allow and facilitate the agency's distribution of food, medicines and other humanitarian assistance.

Meanwhile, UNRWA has been advised that the agreement reached between authorities and armed groups inside Yarmouk needs time to be fully implemented. However, the agency appealed to all parties to give the utmost priority to addressing the protracted suffering of civilians inside the camp.

“Civilians in Yarmouk have already suffered greatly and should not have to endure further anguish. A resumption of UNRWA's humanitarian operations inside Yarmouk is a matter of the greatest urgency,” Mr. Gunness said.

Before this latest disruption, UNRWA was able to distribute more than 6,500 food parcels, 10,000 polio vaccines and a range of other medical supplies since 18 January, when, after months of negotiations with the parties, its access to the area was restored for the first time since September. 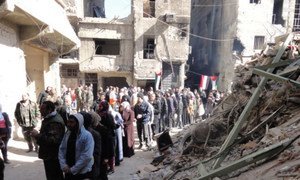 Warning that food and basic supplies are running dangerously low for thousands of Palestinians languishing in the besieged Damascus suburb of Yarmouk, the United Nations agency assisting Palestine refugees across the Middle East called Saturday for speedy access to the men, women and children whose lives hang in the balance.