73,000 people have been displaced by the conflict in South Kordofan State
15 February 2014

The United Nations Security Council has called on the Sudanese Government and the Sudan People's Liberation Movement–North (SPLM-N) to reach an accord on ending nearly three years of conflict in strife-torn South Kordofan and Blue Nile, as peace talks resumed in Ethiopia late last week.

In a statement to the press issued yesterday evening, the Council welcomed resumption of negotiations on February 13 between the Sudanese Government and the SPLM-N in Addis Ababa, Ethiopia, under the auspices of the African Union High-level Implementation Panel (AUHIP), and the parties' reported commitment to the talks.

The Council underscored its calls upon both parties to cease hostilities, engage in direct and constructive talks without conditions, and make the necessary concessions to reach agreement on ending the conflict in South Kordofan and Blue Nile states, in accordance with provisions of its resolution 2046 (2012).

Southern Kordofan and Blue Nile, which lie on the border between Sudan and its strife-riven neighbour, South Sudan, have been beset by fighting since 2011. The SPLM-N was previously part of the rebel movement that fought for the independence of South Sudan.

By resolution 2046, the Council decided that the Government of Sudan and the SPLM-N must cooperate with the AUHIP and the Intergovernmental Authority for Development (IGAD) to reach a negotiated settlement on security arrangements in Blue Nile and South Kordofan states, strongly urging them to accept the tripartite proposal of the African Union, the United Nations and the Arab League to permit humanitarian access to the population in those two areas.

In their latest statement, the Council members reiterated their grave concern about the dire humanitarian situation in South Kordofan and Blue Nile. They also called on all parties to refrain from any acts of violence against civilians – particularly indiscriminate actions in civilian areas.

The Council conveyed its gratitude to former South African President Thabo Mbeki and the staff of the AUHIP, as well as UN Special Envoy Haile Menkerios and his support team for their creative and tireless work in mediating the discussions and agreements between the parties.

On the wider region, the Council members welcomed the “increasingly positive” bilateral relations between Sudan and South Sudan, as evidenced most recently by the 6 January visit to Juba by President Omar Bashir for talks with President Salva Kiir.

The Security Council also recognized the bilateral support offered by the Sudanese Government to the Government of South Sudan from the outset of the current crisis in South Sudan, as well as the contribution of Sudan “to the search for a lasting solution to this crisis as part of regional efforts led by IGAD, including through its commitment to support the [ceasefire] signed by the parties and offer to participate in the…monitoring and verification mechanism.”

They also conveyed appreciation for the commitment of both Presidents to implementation of September 27, 2012 Cooperation Agreements, particularly on oil and security matters, but noted with concern that there has been no further progress on these agreements since November 2013.

The Council in its statement reiterated grave concern about the “highly volatile” situation in the resource rich Abyei area, and recalled its decision in resolution 2046 (2012) the two nations to implement pending aspects of the 20 June 2011 Agreement on Temporary Security and Administrative Arrangements for the Abyei Area, including the redeployment of all Sudanese and South Sudanese forces out of the Abyei Area.

Emphasizing that the parties must resolve the dispute over the Abyei Area Council and immediately establish the Abyei Area Administration and Abyei Police Service, the Council recalled its decisions in resolution 2046 that Sudan and South Sudan “shall unconditionally resume negotiations under the auspices of the [AUHIP] and with the support of the Chairman of IGAD, to reach agreement on critical issues, including final status of the Abyei Area.

The Council also urged the two nations to renew their commitment to the establishment of the Safe Demilitarized Border Zone (SDBZ) and full operationalization of the Joint Border Verification and Monitoring Mechanism (JBVMM). 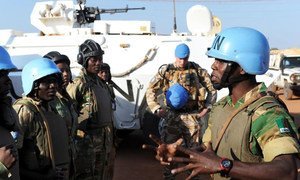