UNICEF/NYHQ2012-0218/Alessio Romenzi
Syrian children shelter in the doorway of a house, amid gunfire and shelling, in a city affected by the conflict.

15 February 2014
Calling an end to the latest round of United Nations-backed talks in Geneva on Syria's civil war, Lakhdar Brahimi apologized to the Syrian people on Saturday for the lack of progress on halting the bloodshed in their country, and urged Government and opposition negotiators to go back to their bases and reflect on their responsibility and “on whether they want this process to continue or not.”

“I am very, very sorry, and I apologize to the Syrian people that…we haven't helped them very much,” said Mr. Brahimi, the United Nations/Arab League Joint Special Representative, telling a press conference that while no date was set to resume the talks, he presented both sides with an agenda for the next round, “so that we don't lose another week or 10 days as we have this time.”

This is the second round of UN-sponsored direct talks between Government and opposition representatives – the first set of discussions took place in late January – to end a war which has killed well over 100,000 people and driven nearly 9 million others from their homes since the conflict erupted between President Bashar al-Assad and various groups seeking his ouster nearly three years ago.

“People are dying, the country is being destroyed. If this track aims at helping the Syrian people, then of course, the faster we achieve tangible results, the better,” Mr. Brahimi said in response to a question, but added he has made it clear that “everybody needs to go back to their base and we will contact each other to determine the date [of the next round].

The talks have so far yielded only modest cooperation between the sides on allowing UN and Syrian Red Crescent relief workers access to thousands of people trapped in the long-besieged Old City of Homs, and Mr. Brahimi said today he felt “the little that has been achieved in Homs gave [the Syrian people] even more hope that maybe this is the beginning of the coming out of this horrible crisis – I apologize to them.”

As for next steps, Mr. Brahimi said the parties agreed to his proposal that a new round of talks would focus on violence and terrorism, a transitional governing body, national institutions and national reconciliation. But he acknowledged that the main sticking point persisted: the Government side considers that the most important issue to be combatting terrorism; the opposition considers that the most important issue is forming a transitional governing authority.

“We suggested that the first day will be set for discussion on…ending violence and combating terrorism and the second day would be reserved for a discussion on the TGB [transitional governing body],” he explained, but while he had made clear that one day would not give enough time to conclude discussions on either issue, “unfortunately, the Government has refused [this approach], which raises the suspicion of the opposition that in fact the Government doesn't' want to discuss the TGB at all.”

“I very, very much hope that the two sides will reflect and think a little bit better and come back ready to engage seriously on how to implement the Geneva Communiqué,” he said, referring to the 2012 action plan adopted at the first international meeting in Switzerland on the conflict and the full implementations of which is the basis of the current talks. “The Communiqué helps the two sides, and us sitting between them, to start the long road towards ending this crisis.”

Of the fact that the two sides remain at odds over how to tackle his four-point proposal, Mr. Brahimi underscored that while they had “at least” agreed on an agenda: “It is not good for Syria that we come back for another round and fall in the same trap that we have been struggling with this week and most of the first round.”

“I think it is better that every side goes back and reflect and take their responsibility: do they want this process to take place or not? I will do the same,” he said, adding that will head to New York to meet with UN Secretary General Ban Ki-moon, as well as United States Secretary of State John Kerry and Russian Foreign Minister Sergey Lavrov, the initiators of the Geneva talks.

He also plans to brief the other permanent five members of the Security Council – China, France and the United Kingdom – as well as the body's 10 non-permanent members.

“So I hope that this time of reflection will lead the Government side in particular to reassure the [opposition] that when they speak of implementing the Geneva Communiqué they do mean that a TGB exercising full executive powers will be the main objective to follow,” said Mr. Brahimi, adding that ending violence and combating terrorism “is extremely important, indispensable.”

Asked if he had a specific message for President Assad as the talks wrapped up, Mr. Brahimi said: “My message to everybody involved in this terrible crisis is to think of the Syrian people, to think of the immense suffering that has been imposed on [them], the destruction that has taken place in Syria, and to think of what anyone can contribute to pull Syria out of the ditch in which it has fallen.”

To a question about the ongoing commitment of Russia and the US, he said he continued to believe the two countries are important partners with the United Nations. “There is no doubt - and I have said repeatedly- that the United Nations, the Russian Federation and the United States; none of them can turn a blind eye to this huge crisis in Syria.” 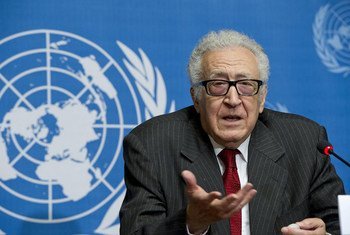