IRIN/Anna Jefferys
Fishsellers from Gao in northern Mali, who fled south to Mopti.

13 February 2014
Some 90 per cent of the 11th century archaeological site of Gao Saneye in northern Mali was pillaged by Islamic extremists during their seizure of the region in 2012, traditional musical instruments and costumes were destroyed, and a World Heritage site mosque needs urgent repairs, United Nations cultural officials reported today.

The report on the damage to cultural heritage in the town of Gao, addressing both sites and the cultural practices of local people, follows a UN assessment last year of Timbuktu, another major heritage site in northern Mali, which found that damage there was more extensive than first estimated, including the destruction of parts of the 15th century Djingareyber Mosque, one of three madrassas comprising the University of Timbuktu.

“Concerning Gao's heritage, we must address the trauma experienced by the local population following violent attempts by the armed extremists to destroy their cultural identity and practices, including traditional music,” UN Educational, Scientific and Cultural Organization's (UNESCO) country Director Lazare Eloundou Assomo said after visiting the city with Malian and international experts.

“Urgent measures are required to safeguard the Tomb of Askia World Heritage site before the next rainy season in June.”

The dramatic 17-metre-high pyramidal structure, built in 1495 by Askia Mohamed, Emperor of Songhai, which flourished in the 15th and 16th centuries through its control of trans-Sahara trade in salt and gold, is a fine example of the monumental mud-building traditions of the West African Sahel.

The complex, including the pyramidal tomb, two flat-roofed mosque buildings, the mosque cemetery and the open-air assembly ground, was built when Gao became the capital of the Songhai Empire and after Askia Mohamed had returned from Mecca and made Islam the official religion of the empire.

Radical Islamists seized Northern Mali after fighting broke out in January 2012 between Government forces and Tuareg rebels. French, Malian and other African forces pushed them out in 2013. The UN Multidimensional Integrated Stabilization Mission in Mali (MINUSMA) took over from an African-led force in April with a mandate to carry out security-related tasks and protect civilians, UN staff and cultural artefacts.

During their visit to Gao, the experts found that the local community had carried out work to repair the Tomb to avoid further deterioration. Young town's people also took the risk of defending the site during the occupation, preventing the extremists from damaging it in the way they damaged World Heritage sites in Timbuktu.

But despite community efforts, the experts found that the mosque's prayer rooms require major conservation work before the next rainy season, to prevent further deterioration.

Community representatives told the mission of the difficulties endured by the inhabitants, especially cultural groups, musicians and dancers, who saw their instruments burned and their equipment and costumes destroyed.

The Takamba, a popular Songhoy dance, as well as the Holey-Orey, the dance of the possessed, were prohibited. Women were forced to cut their traditional braids and stop wearing traditional ethnic costumes, and the House of Artisans was vandalized, leaving artisans without sources of income.

UNESCO and the Malian authorities will now work together to produce a complete needs assessment of the cultural heritage of Gao and take measures to safeguard it. 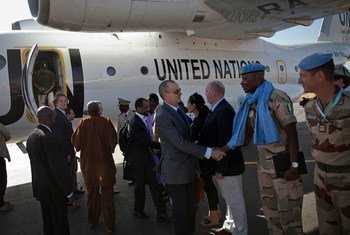 3 February 2014
The Security Council today wrapped up a two-day visit to Mali, where it got a first-hand look at United Nations efforts to assist the West African nation as it emerges from crisis and tackle a host of political, security, development and humanitarian challenges.