United Nations Secretary-General Ban Ki-moon and the head of the UN Assistance Mission in Somalia (UNSOM) strongly condemned an attack near the airport in Mogadishu that resulted in a number of deaths and injuries, as well as damage to a UN vehicle.

A vehicle exploded close to a UN convoy near the airport at about 12:30 local time, according to a statement issued by the Secretary-General’s Special Representative for Somalia, Nicholas Kay.

“The UN in Somalia strongly condemns the attack and expresses deep sorrow at the reported deaths and injuries of Somali bystanders,” said Mr. Kay, who is head of the UN Assistance Mission in Somalia (UNSOM).

He added that a UN car was damaged but no UN staff were injured. Four security escorts were slightly injured.

In a statement issued by his spokesperson in New York, the Secretary-General condemned the attack and expressed his deep condolences to the families of the Somali citizens that have been killed and wishes a swift recovery to those injured.

“The Secretary-General remains determined to support the Somali Government in preventing such attacks and holding the perpetrators accountable,” the statement said, expressing his appreciation for the UN staff in Somalia for their continued dedication under difficult circumstances.

“The Secretary-General reaffirms the undeterred resolve of the United Nations to support the people and Federal Government of Somalia,” the statement added. 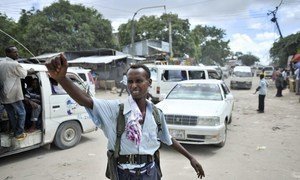 Appalled by the deadly bomb attacks carried out in Mogadishu Wednesday, for which Al-Shabaab claimed responsibility, the United Nations Security Council and Secretary-General Ban Ki-moon underlined their strong resolve to back global efforts aimed at ending the threat posed by the group and to support all measures to restore peace in long-troubled Somalia.