12 February 2014
An independent United Nations human rights expert today urged the Government of Tajikistan to fully implement its policies to eradicate and prevent torture and ill-treatment.

An independent United Nations human rights expert today urged the Government of Tajikistan to fully implement its policies to eradicate and prevent torture and ill-treatment.

“Tajikistan still needs to breach the gap between policies and reality,” said the Special Rapporteur on torture, Juan E. Méndez, following a three-day follow-up mission to the evaluate the implementation of the recommendations issued after his 2012 visit.

“I find it very satisfying to see that my recommendations were taken so seriously and that systematic action has been initiated by the Government to implement some of them,” he stressed.

Mr. Méndez welcomed in particular the adoption of a National Action Plan to implement his advice, and other measures taken, such as the new institute of forensic medicine, legal awareness campaigns and capacity building efforts.

“I regret, however, that civil society has not been consulted in the creation or execution of this Plan, that some areas lack specificity and measurable indicators and that no specific time frame for the implementation is provided,” he noted.

The expert was encouraged by the adoption of new legislation that brings the definition of torture in line with the Convention against Torture and a Supreme Court decree that guarantees the availability of safeguards to prevent torture from the time of apprehension.

However, he insisted that the punishment for torture and ill-treatment needs to be increased in accordance with the severity of such acts and that amnesty for these crimes needs to be specifically prohibited in the applicable legislation.

“I am still concerned that in the past two years only four cases were prosecuted under the new provision despite the fact that allegations of torture and ill-treatment during apprehension, interrogation, pre-trial detention, and in prison still persist,” said the expert.

“The Government must continue working to ensure that improved laws and policies result in concrete changes in practice,” he stressed. In particular, the Special Rapporteur remains highly concerned about persisting denial to access legal counsel in a timely and independent manner.

Mr. Méndez voiced regret that there has not been substantive progress to ratify the Optional Protocol to the Convention against Torture and the creation of a National Preventive Mechanism (NPM).

“The ratification would prove the openness of prison authorities and would enhance the transparency of the penitentiary system,” he said, “and the NPM is essential for the investigation and punishment, but most of all for the prevention of torture and ill-treatment.”

Among his other concerns was the lack of compliance with the non-refoulement provision in the Convention Against Torture. “The legislation should be amended to ensure that the obligation not to extradite or deport or expel a person to a country where he or she faces a risk of torture or ill-treatment is duly recognized and that appropriate legal recourse is guaranteed in order to allow for a meaningful risk assessment,” he stated. 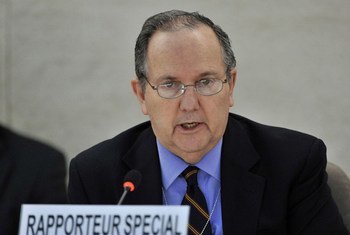 18 May 2012
The United Nations independent expert on torture today said he was encouraged by recent legal changes in Tajikistan, including the introduction of a new provision defining torture and specifying penalties, but noted that mistreatment of suspects remains common.