FAO/J. Swolfs
FAO is distributing seeds and tools to displaced people living in camps so that they can grow vegetables.

A WFP-chartered Boeing 747 from neighbouring Cameroon landed in Bangui, capital of the Central African Republic (CAR), with 82 metric tons of rice the agency in a shipment, which along with 24 other flights expected over the next four weeks, the agency is calling “a lifeline”.

“We are launching these airlifts at a high cost but we have no choice,” said WFP Regional Director for West Africa Denise Brown.

WFP has said that the price of transporting by air the estimated 1,800 metric tons of mostly rice – enough to feed 150,000 people for a month – would be $2 million, roughly five times more expensive than transportation by road, which is insecure and deemed too unreliable to transport all the food aid.

At one stage, 51 WFP food trucks were blocked at the Cameroon border for weeks. Two large road convoys escorted by troops from the African-led International Support Mission (MISCA) have now arrived in Bangui.

In addition to immediate aid, WFP is replenishing food stocks in remote places during the “lean season” when hunger usually starts to peak and before the rainy season begins in May when roads will be impassable.

Meanwhile, the UN Food and Agriculture Organization (FAO) warned that farmers in the country urgently need seeds and essential tools for the March planting season if they are to help avert a full-scale food and nutrition crisis.

The success of the planting season could be a critical turning point for food security in the country, where around 75 per cent of the population rely on small-scale agriculture for their food and income, said Alexis Bonte, acting FAO Representative in CAR.

“The civil conflict is putting millions at risk of a full-scale food and nutrition security crisis,” Mr. Bonte noted. “The situation is increasingly worrying in the capital city, Bangui, but even more acute in the rest of the country.”

Some 833,000 people are displaced from their homes across the country, more than 400,000 of them in Bangui alone, according to the UN Office for the Coordination of Humanitarian Affairs (OCHA). The UN Refugee Agency (UNHCR) reported an additional 268,779 people seeking refuge in Cameroon, Chad, Congo and the Democratic Republic of the Congo (DRC).

“We are witnessing a humanitarian catastrophe in Central African Republic,” UN High Commissioner for Refugees Antonio Guterres today told reporters during a visit to Bangui. “There is an ethnic-religious cleansing taking place.”

Thousands of people in CAR are estimated to have been killed in the crisis, which began when the mainly Muslim Séléka rebels launched attacks a year ago, and has recently taken on increasingly sectarian overtones as militias known as anti-Balaka (anti-machete), who are mainly Christians, take up arms.

Speaking with a group of journalists yesterday at the UN Headquarters in New York, Secretary-General Ban Ki-moon stressed that both Muslims and Christians have been murdered and forced to flee their homes.

“The sectarian brutality is changing the country's demography,” he said. “The de facto partition of the CAR is a distinct risk.”

Mr. Ban added that the international response to the conflict “does not yet match the gravity of the situation”, and urged more action to prevent more atrocities, protect civilians, restore law and order, provide humanitarian assistance and hold the country together.

Edmond Mulet, Assistant Secretary-General for Peacekeeping Operations, is currently in the CAR and is scheduled to meet today with interim president, Catherine Samba Panza.

Mr. Mulet is looking into the possible transformation of MISCA into a UN peacekeeping operation, Mr. Ban confirmed. “But even if that change looks increasingly necessary, it would take time for it to happen.”

Mr. Ban has been working the phones, speaking with Nkosazana Dlamini Zuma of the African Union and French Foreign Minister Laurent Fabius, among others, about sending additional troops to the country. 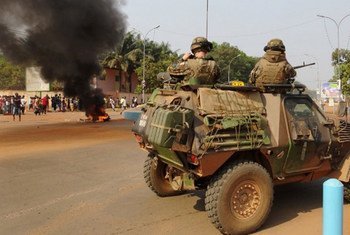