While nearly 1 billion people have escaped extreme poverty in the past 20 years and child and maternal mortality have been cut by almost one half, much more work remains to be done to address inequalities and ensure the rights and dignity of all, especially women and children, top United Nations officials stressed today.

“Our objective is to deliver equal rights and opportunity to all, to eradicate extreme poverty and to set the world on a sustainable development path,” Secretary-General Ban Ki-moon said at a news conference at UN Headquarters to launch the International Conference on Population and Development Global Review Report.

A total of 179 Governments signed up to the ICPD Programme of Action, which set out to provide universal access to family planning and sexual and reproductive health services and reproductive rights, and deliver gender equality, empowerment of women and equal access to education for girls.

The Programme of Action also sought to address the individual, social and economic impact of urbanization and migration, as well as support sustainable development and address environmental issues associated with population changes.

“It affirmed sexual and reproductive health as a fundamental human right,” Mr. Ban said of the Conference. “And it emphasized that empowering women and girls is key to ensuring the well-being of individuals, families, nations and our world.”

He noted that the past two decades have seen “considerable” advances in equality and empowerment for women, global health and life expectancy, and education for girls, adding that much has been accomplished through the framework of the global anti-poverty targets known as the Millennium Development Goals (MDGs).

“But much remains to be done,” he said, noting that the report launched today highlights the enormous inequalities that remain in the realization of human rights and access to vital services, as well as new challenges and opportunities related to population growth, changing age structures, rapid urbanization and migration.

“We need to establish common policy responses to the yearnings of people everywhere for a better life,” stated the Secretary-General.

“Delegates from all regions and cultures recognized that increasing social, economic and political equality and access to sexual and reproductive health and rights is the basis for individual well-being, lower population growth and sustainable development. The evidence of the report launched today supports this consensus.”

While describing some of the achievements cited in the report, Dr. Osotimehin said that progress over the past 20 years does not tell the whole story.

“The report reveals in stark detail the persistent inequalities and discrimination that threaten to derail development. In many countries and regions, progress is limited to the wealthy with enormous numbers of people excluded from the process and benefits of development,” he said.

“More than half of the absolute gains in global income from 1988 to 2008 went to the richest 5 per cent and none went to the bottom 10 per cent. In the poorest communities, women’s status, maternal death, child marriage and many of the concerns of Cairo have seen too little progress over the past two decades,” he added.

Among other challenges, he noted that around 800 women die daily while giving birth; one in three women worldwide report having experienced physical or sexual abuse; and one in three girls in the developing world is married before the age of 18, despite the fact that marriage under 18 is illegal in 158 countries.

The Executive Director went on to add that there is no country today in which women are equal to men in political and economic power. In addition, too many people, particularly the poor, live without access to sexual and reproductive health services, including family planning. Indeed, more than 200 million women in the developing world who want contraception are not getting it.

“Twenty years on, we still have a long way to go in realizing the vision of Cairo,” said Dr. Osotimehin. “But the ICPD 20-year review shows us that the vision is still as relevant today as it was in 1994.”

♦ Receive daily updates directly in your inbox - Subscribe here to a topic.
♦ Download the UN News app for your iOS or Android devices.
reproductive health 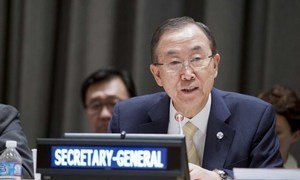