A senior United Nations official today appealed to all parties in the Syrian conflict to ensure unimpeded access for the delivery of humanitarian aid to civilians in need, especially the thousands of Palestinian refugees languishing in the besieged Damascus suburb of Yarmouk.

Filippo Grandi, Commissioner-General of the UN Relief and Works Agency for Palestine Refugees in the Near East (UNRWA), told a news conference in New York that the agency was able to deliver about 6,500 food parcels and 10,000 polio vaccines in the past couple of weeks, but that this is “a drop in the ocean” compared to the needs of the area’s 18,000 residents.

Prior to the armed conflict in Syria, which began in March 2011, Yarmouk – a suburb just south of Damascus – was home to over 160,000 Palestine refugees. In December 2012 and in the months since, conflict has caused at least 140,000 Palestine refugees to flee their homes in Yarmouk, as armed opposition groups established a presence in the area, with Government forces controlling the periphery.

UN agencies and their partners obtained limited access to Yarmouk in recent weeks, after not having been able to deliver assistance since last September. However, they have not been able to enter for the past several days, and renewed negotiations are ongoing.

Half of the 540,000 Palestinian refugees in Syria have been displaced since the conflict erupted three years ago. About 80,000 have gone to other countries, in particular to Lebanon, which is the easiest to get to. Mr. Grandi noted “a bit of irony” about this since Lebanon, he said, is the place where Palestinian refugees have always had a difficult time in terms of rights and access to jobs.

“But it was the only way out,” he stated, adding that Palestinians in Syria “have suffered by and large the same fate as all other civilians” but have had “much more limited flight options than other people.”

Mr. Grandi, who is set to leave his post at the end of next month after heading UNRWA for the past four years, also drew attention to yesterday’s explosion in the southern Syrian city of Dera’a at a UN school, as just the latest example of the dangers faced daily by civilians in the war-torn nation.

Some 40 children were injured in the explosion, along with four UNRWA staff, at the Turaan School, which has a total of 270 students.

UNRWA condemned the attack and appealed to the parties once again to ensure that schools, hospitals and UN facilities are protected amid the ongoing conflict. “This is a marked UN school, so there is no two ways about it,” stressed Mr. Grandi. 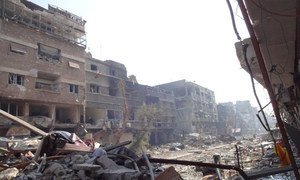