The United Nations committee mandated to ensure compliance with the global treaty to end all forms of discrimination against women opened a new session today with a call for gender equality to be fully integrated into the post-2015 agenda.

“We believe there should be a stand-alone goal or goals on equality and non-discrimination that addresses all kinds of discrimination, including discrimination on the basis of sex,” UN High Commissioner for Human Rights Navi Pillay said at the opening of the 57th Session of Committee on the Convention on the Elimination of Discrimination against Women (CEDAW) being held in Geneva until 28 February.

The UN is currently formulating a new post-2015 agenda to chart the course of global development for decades to come, expanding on the Millennium Development Goals (MDGs) adopted at a UN summit in 2000, which aim to slash extreme hunger and poverty, cut maternal and infant mortality, combat disease and provide access to universal education and health care, all by the end of 2015.

Ms. Pillay also called for the overall strengthening of treaty bodies to meet the triple challenge of a significant backlog, chronic under-resourcing and insufficient compliance with reporting obligations. “If no prompt action is taken to rectify these problems, the treaty body system is threatened with collapse,” she warned.

But she also paid tribute to what CEDAW has managed to achieve over the past three decades. “The struggle has been long, and it seems to me that, rather than just mulling over our setbacks or assessing the challenges ahead, we too rarely pause to appreciate our accomplishments along the way,” she said.

“The work of the Committee, in my view, is a cause for great pride. Over more than 30 years, this Committee has worked assiduously to elaborate in detail the contours, content and details of the full range of women’s rights.” 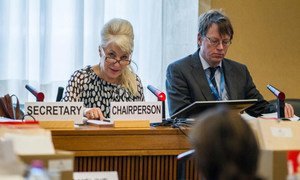