7 February 2014
The Olympic spirit of fair play, mutual respect and friendly competition “melts away barriers” and sets an example for international relations, United Nations Secretary-General Ban Ki-moon told tens of thousands of spectators and tens of millions of others watching on television around the world at the opening of the Winter Olympic Games in Sochi, Russia, today.

“The Olympics and Paralympics bring out the best in athletic achievement,” he said in a video message broadcast at the ceremony. “The Olympic Flame also illuminates hope for our common humanity. Even in the cold winter weather, barriers between people melt away.”

“The Olympic spirit prevails: Fair play, mutual respect, friendly competition. Let us take that spirit and spread it around the world.

“For peace – and a truce between warring parties around the world. For human rights and an end to discrimination. For a life of dignity for all. Together, let us celebrate sports and solidarity.”

Mr. Ban, who is in Sochi for the Games, is holding meetings with other world leaders attending the opening ceremonies, as well as leading sports officials.

In talks with Chinese President Xi Jinping, the two stressed the importance of sports for peace and development, and noted that the UN and the International Olympic Committee (IOC) are natural partners with shared goals.

On Syria, Mr. Ban voiced appreciation for China’s constructive role in supporting the political process, its contributions to humanitarian aid its efforts to destroy chemical weapons in Syria, including through providing a naval escort.

He thanked China for its contributions to UN peacekeeping and for its leadership role towards the denuclearization of the Korean Peninsula and reducing tensions there, urging Mr. Xi to encourage the parties to take positive confidence-building steps such as the recently agreed family reunions and to follow through on them.

Mr. Ban also met Sir Philip Craven, President of the International Paralympic Committee (IPC) for disabled athletes, highlighting its key importance in promoting the UN Convention on the Rights of Persons with Disabilities, which has embraced sports as a way to create societies that value diversity and inclusion. 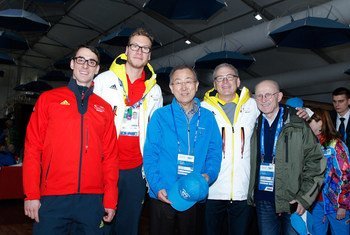 6 February 2014
In Sochi, Russia, United Nations Secretary-General Ban Ki-moon today praised the power of sport to promote human rights and unite people regardless of their age, race, class, religious, ability, sex, sexual orientation or gender identity in a first of its kind address to the International Olympic Committee (IOC).