UN Photo/Isaac Billy
A view of the deserted streets in the town of Malakal, in the Upper Nile State of South Sudan, with Government troops on patrol in late January 2014.

7 February 2014
The United Nations has extended its relief operations in the South Sudanese town of Malakal, scene of some of the fiercest fighting between Government and opposition forces, moving outside its base where it is sheltering 28,000 civilians to reach 10,000 others driven from their homes.

“This is the first aid to reach the displaced people outside of the UN base in Malakal,” UN refugee agency (UNHCR) spokesperson Fatoumata Lejeune-Kaba told a news briefing in Geneva today.

“Insecurity as well as wide-spread looting of humanitarian assets meant that UNHCR and other agencies were unable to deliver aid to those displaced outside of the UN base in Malakal until now.”

Since Tuesday, UNHCR has delivered plastic sheeting, jerry cans, buckets, kitchen sets, mosquito nets, sleeping mats and blankets airlifted into Malakal from its regional stockpile in Nairobi, Kenya, to more than 3,000 people and hopes to reach the other 7,000 by the end of next week.

Thousands of people are believed to have been killed and more than 870,000 others have fled their homes since fighting broke out on 15 December between the forces of President Salva Kiir and deputy president Riek Machar, 75,000 of them seeking refuge on 10 UN bases throughout the country. The two sides signed a ceasefire in Addis Ababa, Ethiopia, last month, leading to a relative lull.

“Insecurity as well as wide-spread looting of humanitarian assets meant that UNHCR and other agencies were unable to deliver aid to those displaced outside of the UN base in Malakal until now,” Ms. Lejeune-Kaba said. “We are taking advantage of the relative calm following the signing of the cessation of hostilities agreement between the warring forces on 23 January 2014 to deliver aid to the most vulnerable.”

Malakal some 600 kilometres north of Juba, the capital, is in the oil-bearing state of Upper Nile, which has 153,000 displaced people, the second largest concentration after Unity State with more than 188,000.

Most of the displaced in Malakal outside the UN base have been staying in schools and other sites for weeks while others continue arriving from Khorflus in neighboring Jonglei State or from nearby villages, citing fear and insecurity despite the truce.

“Some of the displaced have told our emergency staff that the security situation in their villages continues to be tense and that they could not work or survive in that kind of environment,” Ms. Lejeune-Kaba said. “The city of Malakal itself remains largely deserted and civilians continue to flee to and from it.”

UNHCR is distributing the relief items in close collaboration with other UN agencies and humanitarian agencies, including the UN Children’s Fund (UNICEF), the International Organization for Migration (IOM) and the Christian non-governmental organization World Vision. 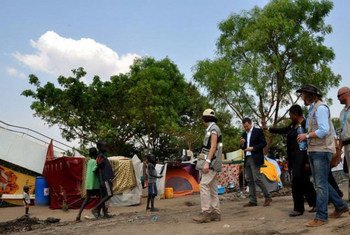 28 January 2014
The United Nations humanitarian chief continued her visit to South Sudan today with a stop in Malakal in Upper Nile state, where she met with communities displaced by the recent conflict and observed the efforts of aid agencies that have been assisting those affected by the violence.