5 February 2014
Calling the role of women in decision-making vital for Afghanistan’s future, the top United Nations official there said today the level of their participation in Presidential and Provincial Council elections on 5 April will be “a key measure of success” of the polls.

“Participation as candidates, electoral workers, observers, and voters is a key democratic right of all women,” Secretary-General Ban Ki-moon’s Special Representative Ján Kubiš told a national conference on women and elections in Kabul, the capital.

“For Afghanistan, your participation in the civic life and decision-making of the nation strengthens its representative institutions and is vital to accelerating economic and development progress.”

Mr. Kubiš stressed that one of the most striking changes in Afghanistan since the 2001 overthrow of the Taliban, which had sharply curbed the role of women, has been women’s increased engagement in civic life with over a quarter of MPs and senators being female.

“This is a higher percentage than many long-standing democracies, and is because of the organization and advocacy of women’s activists at the time of the Constitutional Loya Jirga (assembly),” he said. “These elected representatives have had a strong voice not just on specifically ‘women’s’ issues but important perspectives, and leadership, on everything from reconciliation to economics.”

In order to encourage and secure women’s participation in the polls, the Interior Ministry is planning to deploy 13,000 female searchers at polling centres and to provide security to the 308 female Provincial Council candidates.

The vote will mark the first ever transfer of power from one elected president to another in the country’s history, as President Hamid Karzai is constitutionally barred from seeking another term.

“I have been greatly encouraged that in my meetings with all presidential candidates, women’s rights, addressing women’s issues and seeking women’s perspectives have been a recognised part of their platforms,” Mr. Kubiš said, stressing the importance of implementing the law on the Elimination of Violence Against Women.

“Laws must not just stay on the page, rights are not simply nice words,” he said, recommitting UN support for the effort. “Having been won they must be exercised.”

He noted that while the elections will not be perfect they are another important step in building Afghanistan’s democracy. “Participation as voters and as candidates provides women a voice in public life and can help ensure that issues of importance to you receive prominence in the country’s civic life,” he concluded. 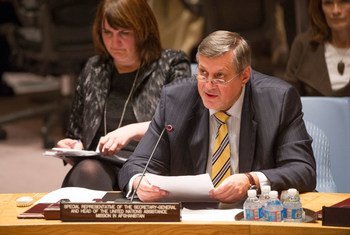 17 December 2013
Despite volatility and uncertainty, Afghanistan continues to make progress in enhancing its stability as the drawdown continues for the international forces that have sought to bring security there for the past 12 years, the top United Nations envoy in the strife-torn country said today.