“Markets have collapsed, infrastructure is damaged, foreign traders have fled, commodity supply corridors have been disrupted by violence, and rural populations are unable to bring their crops, livestock and fish to market for sale,” UN Food and Agriculture Organization (FAO) representative Sue Lautze said of the world’s newest country, where conflict erupted in December between the forces of President Salva Kiir and deputy president Riek Machar.

“South Sudan was already the scene of one of the world’s largest humanitarian operations before the fighting began, and the situation is now deteriorating rapidly,” she added.

FAO said over 870,000 South Sudanese have fled their homes since fighting broke out on 15 December, more than double the 355,000 it reported just three weeks ago, when it warned that that the fighting was throwing the agricultural sector into turmoil at a time when preparations should be underway for plantings or harvests.

Meanwhile the agency has received less than 6 per cent of the updated $77 million it is seeking to implement an emergency response plan that includes providing seeds, basic tools, and fishing and community animal health equipment to assist 545,000 households in states most affected by the fighting while protecting food production in less affected areas.

The severe food insecurity will be further exacerbated if farmers miss the planting season beginning in March.

“Missing the main planting season will have serious knock-on effects on food production and availability in the country in 2014 and on into 2015,” said Dominique Burgeon, Director of FAO’s Emergency and Rehabilitation Division, who recently visited South Sudan. “At the moment supply corridors have been disrupted or completely shut down in many areas of the country, and farmers need urgent assistance to access vital agricultural inputs in time.”

Livestock production is threatened by potential disease outbreaks as unvaccinated herds mingle with vaccinated livestock, and this situation is worsened by the partial collapse of the cold chain for vaccine storage due to looting and ongoing violence, FAO warned. To prevent the spread of disease, FAO will equip and train community workers to provide basic health support during migrations and help restore the cold chain.

There are further concerns that many displaced people who have sought shelter along rivers will need to move again due to flood waters as the rainy season approaches, further undermining their food security and recovery of livelihoods.

“Continued violence is obviously hampering the humanitarian response, but FAO will work with local partners on the ground to get vital supplies to vulnerable livestock owners, fishers, farmers and urban populations in the country,” Ms. Lautze said.

As co-leads of the Food Security and Livelihood Cluster, FAO and the UN World Food Programme (WFP) will continue to support the coordination of partners within and beyond the UN.

UN agencies and non-governmental organizations (NGOs) have revised their overall crisis response plan to $1.27 billion to meet urgent humanitarian needs in the first half of 2014.

Meanwhile reinforcements continue to arrive to almost double the strength of the the UN Mission in South Sudan (UNMISS), set up after the country gained independence from Sudan in 2011, to nearly 14,000, with additional helicopters and other materiel on their way.

A contingent of 266 additional peacekeepers arrived yesterday with more battalions expected in the coming weeks. In December the Security Council authorized an additional 5,500 troops and 423 police, bringing the total authorized numbers to 12,500 peacekeepers and 1,323 police. 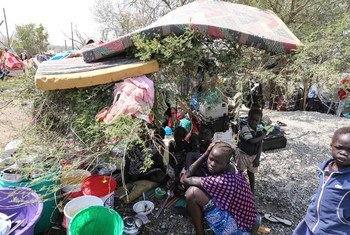