4 February 2014
Secretary-General Ban Ki-moon today pledged to root for women everywhere ahead of his departure for the Winter Olympics in Sochi, while stressing the need for the United Nations and its partners to lay the groundwork to enable all women to enjoy their rights and be empowered.

“We are at a key moment,” Mr. Ban said at a photo-op with former United States Secretary of State Hillary Clinton and Phumzile Mlambo-Ngcuka, the Executive Director of the UN Entity for Gender Equality and the Empowerment of Women (UN Women), ahead of their meeting at UN Headquarters.

He noted that 2015 will be crucial for the future of development and the future of women’s rights. Next year marks the target date for the achievement of the global anti-poverty targets known as the Millennium Development Goals, which contain specific benchmarks for gender equality.

Countries are also working toward the adoption of global development agenda beyond 2015, as well as on securing a global climate change agreement by the end of next year.

2015 also marks the 20th anniversary of the landmark Beijing World Conference on Women. The Beijing Declaration and the Platform for Action, adopted unanimously by 189 countries, is considered the key global policy document on gender equality, addressing critical areas such as women and poverty, violence against women and the human rights of women.

“There has been a great deal of progress since then, but too many women still face far too much discrimination and violence,” said Mr. Ban, adding that the UN family looks forward to continuing to work closely with Ms. Clinton for sustainable development and opportunities for all the world’s women and girls.

The UN chief is set to leave New York today for Russia, where he will attend the opening ceremony on Friday of the 2014 Olympic Winter Games.

The Games, he said, show the power of sport to unite people regardless of gender or sexual orientation. This year’s Games will also showcase progress for women, who will be competing for the first time in the ski jump.

“You will not see me at the top of the jump,” the Secretary-General said, while adding that he will be rooting for women athletes to jump high and leap far. “We have a responsibility to make a jump and [lay] the ground first so that they can jump… Let’s work together to make this world better for all, including women and girls.”

This week UN Women is hosting a number of events on gender equality on the margins of the current meeting of the working group tasked with preparing a proposal on the Sustainable Development Goals called for by Member States at the 2012 UN Conference on Sustainable Development, held in Rio de Janeiro, Brazil.

Gender equality and women’s empowerment are among the overall issues being discussed by the group, along with oceans and seas, forests, biodiversity, conflict prevention, post-conflict peacebuilding and the promotion of durable peace, and rule of law and governance and promoting equality.

More needs to be done to ensure gender equality in peacebuilding, Ban warns 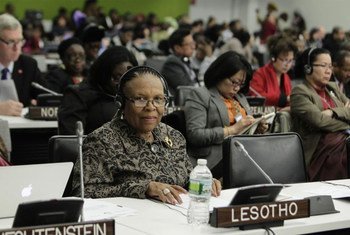 6 March 2013
Senior United Nations officials today emphasized that women will not be able to fully participate in their countries’ economic and political activities until gender equality is achieved, during an event focusing on how businesses can help empower women.