WFP
A woman at Bangui Airport in Central African Republic waits on line at a WFP distribution centre.

4 February 2014
Amid continued fighting in the Central African Republic (CAR), the United Nations Children's Fund (UNICEF) and partners are setting up temporary classrooms for more than 20,000 children in the capital, Bangui, and in the north-west of the country, with more on the way.

“Many schools had been destroyed, and in times of conflict children really needed some form of normality in their lives,” spokesperson Patrick McCormick said in a briefing in Geneva.

Being back in class gave children a “sense of a return to normalcy, stability, and hope for the future”, he added, while the UN agency works with the Government to get permanent schools functioning again.

UNICEF Executive Director Anthony Lake, who spent four days in January, has said that children in the CAR are in desperate need of protection and support.

“They are under assault and being killed in brutal, senseless communal violence, and there is an almost total absence of protection for children,” Mr. Lake told a meeting of the agency's Board today. “For the sake of the children, for the sake of the whole country, we all must urgently scale up our work there.”

The Director of Emergency Risk Management and Humanitarian Response at the UN World Health Organization (WHO), Dr. Richard Brennan, is currently in CAR to see first-hand the crisis and assess the agency's needs there. The risk of trauma and infections are usually the most serious issues in a conflict situation, said spokesperson Glenn Thomas.

Only 120 tonnes of cereals remain in WFP's stocks in Bangui on 30 January and are estimated to last about one week. A convoy of 43 trucks carrying nearly 1,200 metric tons of cereals has been stuck at the border with Cameroon for the past three weeks, blocked by insecure roads and a lack of customs officer, Elisabeth Byrs told the journalists.

An armed escort from the African Mission for Central Africa (MISCA) is expected to reach the town of Garoua-Boulai on the Cameroonian side of the border to assist the trucks, and be back in Bangui by Friday.

WFP is also preparing to start airlifting food via a Boeing 747 from Douala, Cameroon, but given the substantial increase in costs, the plan is a “last-resort measure”, Ms. Byrs said.

The price of transporting the estimated 2,000 metric tons of mostly rice by air would be $2 million, roughly five times more expensive than transportation by road, she added.

The humanitarian response for CAR is already underfunded. Donors have pledged just $60 million, or 11 per cent, of the $551 million the UN and its humanitarian partners requested to provide relief and protection to 1.9 million people across the country over the next three months, said spokesperson Jens Laerke for the UN Office for the Coordination for Humanitarian Affairs (OCHA).

The crisis in the CAR – which began when the mostly Muslim Séléka rebels launched attacks a year ago – has since taken on increasingly sectarian overtones, with violence displacing more than 825,000 people. 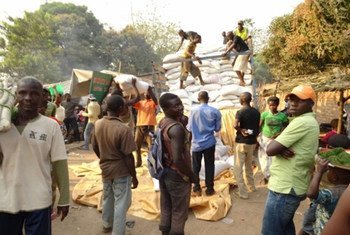 31 January 2014
Unless additional funding is secured for the Central African Republic (CAR), nearly two million desperate people will be forced to go without food and basic necessities, the United Nations said today, as regional leaders attending an African Union summit in Ethiopia discuss ways to stop the ongoing fighting.