UNHCR/K. McKinsey
A teenager displaced by recent violence washes clothes in a basin at the compound of the UN Mission in South Sudan (UNMISS), which has become a makeshift camp for many.

4 February 2014
United Nations agencies and their humanitarian partners in South Sudan launched a revised appeal today, calling for $1.27 billion to help more than 3 million people who continue to suffer the consequences of the conflict in the strife-torn country.

“The priority is to save lives now, and ensure that we have food, medicine and other lifesaving supplies prepositioned in the field, in easy reach of aid agencies before the rains hit and the roads become impassable,”said Toby Lanzer, UN Humanitarian Coordinator for South Sudan.

According to the UN Office for the Coordination of Humanitarian Affairs (OCHA), relief agencies are scaling up the response to assist 3.2 million people through June, based on rigorous prioritization. This includes relief for displaced people and host communities, refugees, and others whose lives and livelihoods are at immediate risk. Aid organizations also plan to provide emergency relief, uphold people's rights and strengthen livelihoods.

Mr. Lanzer said the Crisis Response Plan was revised to reflect the deterioration of the humanitarian situation. Nearly 60 per cent of the funding will go towards pre-positioning of vital aid supplies before the rainy season starts in June.

OCHA underscored that the conflict, which erupted on 15 December 2013, has shattered the lives of millions of people, leading to devastating humanitarian consequences: almost 900,000 have been driven from their homes and thousands more have been hurt or wounded as a direct result of hostilities. Livelihoods have been lost and people's ability to move livestock to pasture, to fish or to hunt, has been severely compromised.

“I ask the international donor community to stand with the people of South Sudan and the aid agencies working here to help them before the situation gets even worse,” said Mr. Lanzer.

Meanwhile, a team from the UN World Food Programme (WFP) is in Sudan's West Kordofan state to assess the needs of civilians fleeing the ongoing conflict in South Sudan.

The agency has provided one month of emergency rations to 7,489 South Sudanese who have fled to South Kordofan and White Nile states, spokesperson Elisabeth Byrs told journalists in Geneva, adding that WFP is appealing for $58 million for its operations in South Sudan, which are only 30 per cent funded.

An estimated 10,000 people have also crossed into Sudan's South and West Kordofan states, which are themselves facing armed violence, according to figures reported last month by the UN High Commissioner for Refugees (UNHCR).

Wrapping up his two-day visit to the country yesterday, Under-Secretary-General for UN Peacekeeping Operations Hervé Ladsous stressed that there could be no other solution to the crisis than a political solution.

The fighting broke out when simmering tensions boiled over in the wake of a political dispute between South Sudanese President Salva Kiir's forces and those of former deputy president Riek Machar in mid-December.

Both sides signed a ceasefire agreement mediated by the regional Intergovernmental Authority on Development (IGAD) in the Ethiopian capital of Addis Ababa last month, and Mr. Ladsous reiterated the importance of adhering to that accord.

He added that seeing thousands of people alive at the UN peacekeeping mission's base in Tomping was a clear indicator that UNMISS, as the Mission in South Sudan is known, had made the right decision in opening its gates to civilians, even though living conditions were difficult.

Over 80,000 civilians are currently protected by UNMISS at eight of its compounds throughout the country, according to figures provided today by the Mission, including 43,000 civilians in Juba alone. 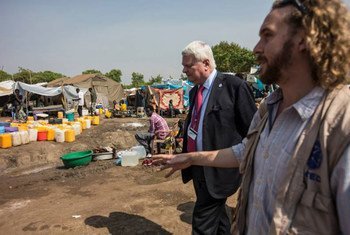 3 February 2014
The United Nations decision to shelter 85,000 civilians on its peacekeeping bases in South Sudan during recent fighting saved thousands or even tens of thousands of lives, the UN peacekeeping chief stressed today, citing it as an example of what the world body stands for.