The Security Council today wrapped up a two-day visit to Mali, where it got a first-hand look at United Nations efforts to assist the West African nation as it emerges from crisis and tackle a host of political, security, development and humanitarian challenges.

The Government is seeking to restore stability and rebuild following a series of setbacks since early 2012, including a military coup d’état, renewed fighting between Government forces and Tuareg rebels, and the seizure of its northern territory by radical Islamists.

The Council last April authorized the UN Multidimensional Integrated Stabilization Mission in Mali (MINUSMA) to assist the authorities in their efforts, with support from the French security mission in Mali, known as Serval.

The 15 members of the Security Council began their visit on Sunday in Mopti, which is 600 kilometres northeast of the capital, Bamako, where they held meetings with the governor and other local authorities. They also met with civil society representatives from northern Mali.

The Council members then visited the MINUSMA’s camp in Mopti and were briefed on the security situation, as well as on the activities of the UN agencies present in the region. They also visited the camp’s field hospital.

Back in Bamako, the Council delegation met with the President of Mali, Ibrahim Boubacar Keïta, and other members of his cabinet.

Today, the delegation met with the Serval Commander and with the Head of the European Union Training Mission (EUTM), as well as with Government officials and members of Parliament.

After a press conference detailing their visit, the Council members issued a statement to the press in which they noted “a clear desire” on the part of all Malian stakeholders to find a sustainable solution to the recurring crisis in the West African nation.

“We reiterate our readiness to support the efforts of the Malian parties through the Special Representative of the Secretary-General and MINUSMA,” said the statement.

The members of the Council urged the parties to engage in inclusive discussions in order to find a sustainable solution without preconditions.

“It is imperative to start these discussions as soon as possible and with a clear timetable. This political framework is necessary to consolidate security gains; to encourage the process of cantonment, ultimately leading to a veritable [disarmament. demobilisation and reintegration] process,” the Council members stressed in their statement.

“We support all the efforts of bilateral and multilateral partners to contribute to this goal and encourage the participation of the parties in seminars on lessons learned, cantonment and development.”

Underscoring the need to remain vigilant, particularly in a context of asymmetric challenges, the Council said that the absence of an inclusive political framework carries the risk of exploitation by “troublemakers”, and added: “We encourage the Government to continue to deploy the administration particularly in the north to restore basic social services.”

Prior to leaving for Mali, the Council last week warned that terrorists and other armed groups appear to have reorganized “and gained some ability to operate” amid the already fragile security situation in northern Mali, and called on all Member States to support the full deployment of UN peacekeepers in the country.

“The Security Council stresses the importance of achieving without further delays the complete operational deployment of MINUSMA to stabilize key population centres and protect civilians,” it said in a Presidential Statement, noting that the primary responsibility for securing the country rests with the Government.

The Mission would “continue to support the re-establishment of State authority throughout the country and the promotion of the rule of law and promotion of human rights,” the Council added. 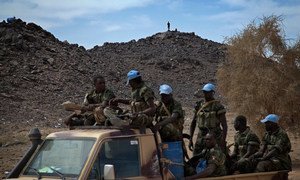 Warning that terrorists and other armed groups appear to have reorganized “and gained some ability to operate” amid the already fragile security situation in northern Mali, the United Nations Security Council today called on all Member States to support the full deployment of UN peacekeepers in the country.