Treatment alone will not win war on cancer: prevention is crucial, UN reports

With new cancer cases worldwide expected to rise from 14 million to 22 million per year within the next two decades, and annual cancer deaths rising from 8.2 million to 13 million, the United Nations today called for multipronged preventive action including treaties and laws extending tobacco-style restrictions to alcohol and sweetened beverages.

“More commitment to prevention and early detection is desperately needed in order to complement improved treatments and address the alarming rise in the cancer burden,” said Dr.

Christopher Wild, Director of the specialized UN cancer agency in launching a new report ahead of World Cancer Day on Tuesday.

The report warns that the global battle against cancer won’t be won with treatment alone and urgently needs effective prevention measures to curb the disease.

As an example of preventive strategies the report highlights the need for adequate legislation to reduce exposure and risk behaviours, citing the first international treaty sponsored by WHO, the Framework Convention on Tobacco Control, as critical to reducing tobacco consumption, a major contributor to lung and other cancers, through taxes, advertising restrictions, and other regulations and measures to control and discourage its use of tobacco.

Similar approaches need to be evaluated in other areas, notably consumption of alcohol and sugar-sweetened beverages, and in limiting exposure to occupational and environmental carcinogenic risks, including air pollution, it stresses, noting that about half of all cancers, whose total annual economic cost is estimated to reach approximately $1.16 trillion, could be avoided if current knowledge was adequately implemented.

“Adequate legislation can encourage healthier behaviour, as well as having its recognized role in protecting people from workplace hazards and environmental pollutants,” said Dr. Bernard Stewart, who co-edited the report with Dr. Wild. “In low- and middle-income countries, it is critical that Governments commit to enforcing regulatory measures to protect their populations and implement cancer prevention plans.”

The study, World Cancer Report 2014, issued by the International Agency for Research on Cancer (IARC), a specialized agency of the UN World Health Organization headed by Dr. Wild, stresses that the cancer burden is mounting at an alarming pace. Due to growing and ageing populations, developing countries are disproportionately affected, with more than 60 per cent of cases and 70 per cent of deaths occurring in Africa, Asia, and Central and South America.

“Despite exciting advances, this report shows that we cannot treat our way out of the cancer problem,” Dr. Wild said, noting that the situation in the developing world is made worse by the lack of early detection and access to treatment.

Access to effective and affordable cancer treatments in developing countries, including for childhood cancers, would significantly reduce mortality, even in settings where health-care services are less well developed, the report notes.

But the spiralling costs of the cancer burden are damaging the economies of even the richest countries and are way beyond the reach of developing countries, as well as placing impossible strains on health-care systems, according to the report, compiled with the collaboration of over 250 leading scientists from more than 40 countries.

“The rise of cancer worldwide is a major obstacle to human development and well-being. These new figures and projections send a strong signal that immediate action is needed to confront this human disaster, which touches every community worldwide, without exception,” Dr Wild said.

Many developing countries continue to be disproportionately affected by the double burden of high infection-related cancers, including those of the cervix, liver, and stomach, and the rising incidence of cancers linked to industrialized lifestyles, such as those of the lung, breast, and large bowel.

Yet the implementation of effective vaccination against hepatitis B virus and human papillomavirus can markedly reduce cancers of the liver and cervix, respectively, the report says, stressing that preventing the spread of tobacco use in low- and middle-income countries is crucial to cancer control.

Likewise, in rapidly industrializing countries, measures to promote physical activity and avoid obesity should also be prioritized in relation to cancers such as those of the large bowel and breast.

In addition, low-tech approaches to early detection and screening have proven their efficacy in developing countries. A prime example is cervical cancer screening using visual inspection with acetic acid and cryotherapy or cold coagulation treatment of precancerous lesions. This type of “screen-and-treat” programme has been successfully implemented in India and Costa Rica, for example.

“Governments must show political commitment to progressively step up the implementation of high-quality screening and early detection programmes, which are an investment rather than a cost,” Dr Stewart said. 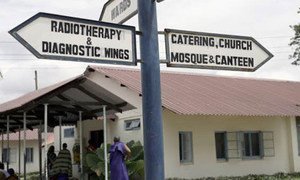 More women are being diagnosed with and dying from breast cancer, the specialized cancer agency of the United Nations World Health Organization (WHO) today reported, calling for greater attention to prevention and control measures to offset lifestyle changes which pushed breast cancer to be the leading cause of cancer death among women.