1 February 2014
Amid a global landscape filled with both volatility and opportunity, Secretary-General Ban Ki-moon today encouraged leaders attending an annual security conference in Germany to work together – and with the United Nations –“to build the world of security that people deserve and that is within our power to deliver.”

In a wide-ranging address to the 50th annual Munich Security Conference, the Secretary-General described the current state of international affairs as grappling with profound demographic, social and environmental change – and enormous shifts in political and commercial power. Moreover, while many countries have achieved stability and progress, many others lack the capacity or the will to meet the expectations of their citizens for freedoms and basic services.

“The United Nations is rising to these challenges through diplomacy and dialogue, peacekeeping and peace-building... and earlier action on violations of human rights,” the Secretary-General said, adding the UN family grasps more keenly than ever that peace and development go hand in hand.

“At the same time, I see places where we are falling dangerously short, at a tremendous cost in lives and credibility,” he said, urging the gathered leaders to work with the United Nations as it seeks to bring stability an ease suffering in South Sudan, the Democratic Republic of the Congo and especially in Syria, which he declared “the most urgent security crisis in the world today”.

“Deeply immersed” in addressing the conflict in Syria, where a devastating there-year civil war “is destroying a nation and engulfing the entire region,” the UN chief underscored that the situation highlights the conundrum the international community faces when there is a compelling need to protect people from grave human rights violations, but there are severe divisions among the main actors: within Syria, among its neighbours, and in the UN Security Council.

While he welcomed the show of support regarding the liquidation of Syria's chemical weapons stockpiles after witnessing the “horror” of a chemical attack last year, Mr. Ban stressed that the vast majority of the killing is being carried out with conventional weapons.

“That is why we have put so much energy into getting the Government and the opposition to the negotiating table in Geneva,” he said, noting that the first round of talks ended yesterday, and that Joint Special Representative of the United Nations and the League of Arab States, Lakhdar Brahimi, has invited the parties to return to Geneva on February 10th.

The Secretary-General said that he and Mr. Brahimi discussed the talks last night with United States Secretary of State John Kerry and Russian Foreign Minister Sergey Lavrov, co-conveners of the UN-sponsored discussions in Geneva and “I urged them to use their influence to ensure the talks proceed as planned.”

Acknowledging that experience with other conflicts suggests that progress will be difficult, Mr. Ban said: “It is hard going, but we have made a start. The parties may still be fighting, but now they are also talking. This is the only hope for a political solution.” The negotiations must not be used as a tactic to delay the end of fighting, he added.

“And every day, the humanitarian situation grows more catastrophic. I am particularly concerned about people trapped in besieged areas beyond the reach of aid,” said Mr. Ban calling on both sides - and the Government in particular - to allow the unfettered access required under international humanitarian law.

He also commended Germany for opening its doors to many thousands of Syrian refugees, and strongly urged everyone with influence on the parties to push for progress in Geneva.

The international community can be effective when it innovates, builds partnerships and acts decisively,” said the Secretary-General, citing joint work between the UN, Governments and regional entities like the African Union (AU) and the European Union (EU), to ensure peace and stability and promote reconciliation in, among others, the Democratic Republic of the Congo, Central African Republic, Mali and South Sudan.

Mr. Ban met the Foreign Minister of Iran, Javad Zarif, on the margins of the Munich Security Conference. They discussed the situation in Syria, in particular the Geneva peace talks, and the Iranian nuclear programme. The UN chief welcomed the Minister's assurances that Iran would play its part in the search for a political solution to the Syria conflict.

At a press conference later in the day, Mr. Ban said he was “heartened” that the warring parties in Syria had finally exchanged views on how to resolve a crisis that has dragged on for three years, and which has killed “considerably more than 100,000 people, displaced millions.”

“The fact that both parties observed a minute of silence for the victims provides a glimmer of hope that they can find common ground,” he said, reiterating that the process that began last week in Montreux and then Geneva will be slow, but it is an important step forward.

He also noted that the Montreux high-level segment of the talks had featured interventions by those that support the Syrian Government and those countries that support the opposition, “so it was a…united [show of] solidarity by the international community to both parties, [while] urging them to resolve all pending issues through a political process. That is, establishing a transitional governing body with full executive powers upon mutual consent.”

“I sincerely hope that the second round of negotiations will begin as planned on 10 February,” said the UN chief, noting that he had asked Secretary of State Kerry and Foreign Minister Lavrov to exercise their countries' influence on the parties to resume negotiations “with greater seriousness and urgency.”

Turning to other pressing matters, he told reporters that later today, he will attend a meeting of the diplomatic Quartet on the Middle East peace process. Mr. Ban said that as 2014 is a crucial year for that effort, the international community must do everything it can to support the current Israeli-Palestinian negotiations and move away from the “dangerous” status quo.

The UN chief said that he also remains “seriously concerned” about developments in Ukraine, including allegations of human rights violations, “which is why I sent Robert Serry on a fact-finding mission to Kyiv this week.” Noting that Mr. Serry is currently his Special Coordinator for the Middle East Peace Process, Mr. Ban said the official was a former Dutch Ambassador to Ukraine.

“I listened carefully to what the Minister and the opposition leaders had to say, and I impressed on them my growing concern about the standoff in the country. I urged the Government to take bold and decisive steps to de-escalate the situation,” said Mr. Ban, adding that he also urged both parties to show maximum restraint and greater flexibility in the search for a solution to this crisis and design a peaceful future for their country.

The Ukrainian capital, Kiev, has been witnessing mass protests since late November, following a Government decision not to sign an agreement on broader integration with the European Union.

The demonstrations flared up again last week in the wake of legislation passed on 16 January that restricted the exercise of fundamental rights, including the rights to freedom of association, assembly and expression, and the operation of non-governmental organizations, as well as imposed penalties, including prison sentences, for breaches.

Just yesterday, the UN human rights office welcomed the start of dialogue between President Viktor Yanukovych and the opposition in Ukraine following weeks of violent unrest.

“We call for this dialogue to be sustainable, inclusive and grounded on the full respect of international human rights treaties ratified by Ukraine,” the spokesperson for the Office of the High Commissioner for Human Rights (OHCHR), Rupert Colville, told a news conference in Geneva.

Among his other activities in Munich, the Secretary-General met with Irakli Garibashvili, Prime Minister of Georgia, whom he congratulated on his recent appointment and expressed his hope for continued strong cooperation between the Government of Georgia and the United Nations.

The Secretary-General and the Prime Minister discussed the importance of the Geneva International Discussions as well as the need to address the humanitarian and developmental needs of the people on the ground throughout Georgia, and to enhance human rights, peace and security. Mr. Ban also invited the Georgian Government to participate at the highest level in the Climate Summit that he will host in New York on 23 September 2014. 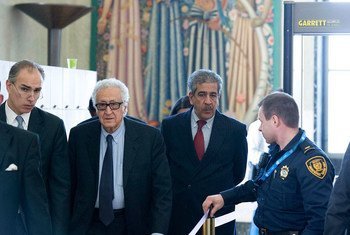 31 January 2014
Syrian Government and opposition delegates today wrapped up what United Nations officials hope will be just the first stage of talks to end the country’s civil war, with the chief mediator reporting no breakthrough to stop the “unspeakable suffering” of the Syrian people, including access for humanitarian aid.